"If it's broken, fix it.
If it's not broken, improve it."
--The Fixer's Manifesto by Sugru

That goes for electric cars too. I've done a couple of little things to our Leaf so far. Let's have a look. 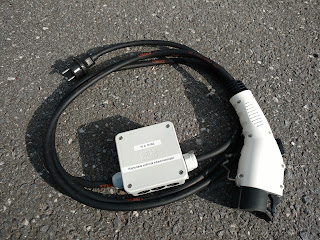 Right off the bat, I just had to have a 16 A charging cable. The car came with a 10 A cable, which is fine for overnight charging, but when you're charging at work or on the road you just want to get the full speed (our Leaf only has a 3.6 kW charger). The EVSE is a kit from GWL Power and the plug with lead is from EVBitz.uk. Works like a charm and is very light so it doesn't put a strain on the Schuko plug. I've since replaced the Schuko plug with an angled one to make it even better. 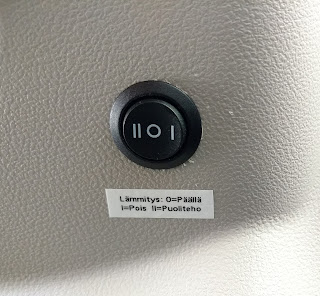 The Leaf's heater control has a major flaw in that the only way to turn off the electric liquid heater in the car is to use the Climate Control Off button, which stops all fans, but also for some reason directs the natural airflow into your feet. That's not what you want in the winter. You want to be able to control the air (mainly direct it to the windscreen) and still turn off the heater for maximum range. Even better, this kit will let you turn off the heater or have it not heat the liquid as hot as it usually does. The only problem is that you need to remember to switch it back on for pre-heating to work, but I'm working on that as well (you need to add a relay driven by the aux 12V plug, but more on that later). 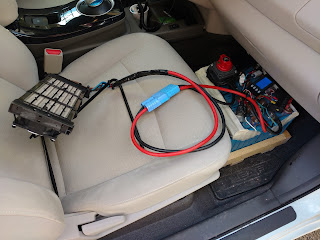 As an additional source of heat I've put together a somewhat portable heating kit, which includes a 1.5 kWh pack of LiFePO4 cells and a 1000W heater from a Citroën C5 along with some fans. It doesn't quite put out the whole 1000W, but a good 750W anyway, which means two hours of heat into the cabin while not using any from the traction pack. Might come in handy in the winter. You can direct it to the windscreen, which might just be enough to keep it from fogging and freezing. We'll see. 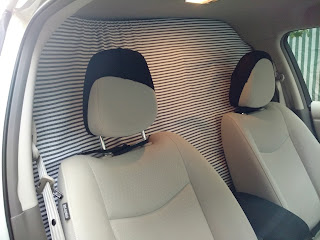 To keep the heat where it's needed we came up with this mattress-based solution. I cut a new 200x120cm mattress into a shape which fits snugly behind the front seats. The piece is 150x120cm at the widest, so you will need a 120cm mattress. My better half even sewed the cover back on so it looks nice. She's a keeper. 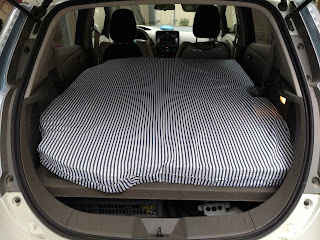 Turns out the cut mattress is also pretty much exactly the right size to fit in the boot with the seats folded down. This might also come in handy if a quick charger is out of order and you need to spend a bit more time charging than you had planned, for example if it's getting late already. 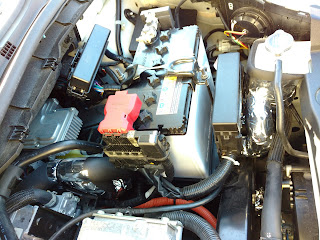 Last, but not the least, definitely not if you consider the amount of work, I wrapped the heating pipes under the hood with some Armaflex XG tube to keep the heat inside the pipes as much as possible. For some bizarre reason the heating system in these early Leafs with liquid heat is not insulated in any way, which lets a lot of the heat just escape and makes the heating terribly inefficient. At least now I've covered most of the pipes. I had to take out the 12V battery, not forgetting to cover the solar panel. Some of the piping below was still unreachable so everything's not perfectly insulated, but I did the best I could. The heater itself has no insulation either and it's sitting right behind one of the cooling fans and a radiator. What were they thinking. Even if this was quite a bit of work, it was the cheapest of the modifications. The tube and the aluminium tape cost 12.10€.

Anyway, with these modifications, mainly related to winter driving, I'll see if I can manage a winter without installing a fuel burning liquid heater which I had in my previous car, the C-Zero. Hopefully I don't have to go there, but I won't be afraid to do it if I have to.