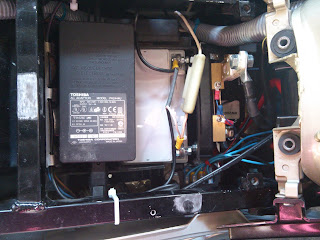 I installed a new auxiliary battery yesterday. It's a 12 V 12 Ah lead acid battery from Biltema, product number 80-268. I'm charging it with an old Toshiba laptop power supply, which puts out a maximum of 5 A at 15 V. It's a little high, but we'll see how this goes. Previously I used old, small UPS batteries, but they probably weren't very good for this purpose and pretty much died. Without the lights on the brick seemed to put out less than an amp, but when I turned on the headlights it ramped up to 5 A. Obviously it's mean for 100-250 VAC, but it seems to run from 80 VDC as well. If the main traction pack falls much below that it will give up, but I suppose that could actually be a good thing. At least it won't drain the pack empty. 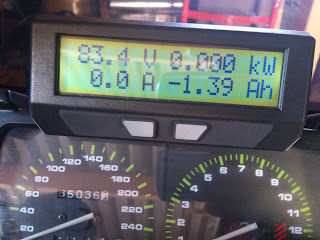 I also recharged the traction pack for the first time after the winter. It had been sitting about six months. I had used it to test the TTL200C motor a bit since the last charge and also gave the ME1003 motor in the motorcycle a little spin just before the charge. Only 1.39 Ah went in. So I can pretty safely say the cells haven't discharged by themselves at all. If I hadn't used the pack at all this would equal about 0.5% self discharge per month. Alas I have and no such thing exists. The specs on these cells aren't lying though. 0% is still below 3%. It's really just a number they came up with when they got tired of silly people asking what's the self discharge and they wouldn't believe there is none. 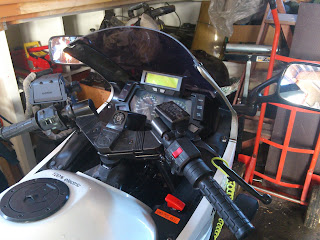 Just watched Looper on Blu-ray. Not a bad flick at all. Something that caught my eye were the vehicles. The makers of the film have stated they wanted a sort of a Cuba-ish feel to the vehicles in that there are old beat up vehicles that have obviously been converted to run on something other that originally ran with. Just like they have replaced engines in the old US cars with Soviet diesels (or so I've heard) in Looper they seem to have converted vehicles to run on a variety of fuels.

The main character drives a mint red sports car which seems not to have been modified in any way so it probably still runs on gasoline. Many cars have some added tubing going around the car from exhaust pipe are to gas cap. One of the characters drives an old Japanese motorcycle with some sort of turbine thing replacing the whole lower part of the vehicle. Many cars are also seen with solar panels on all flat surfaces.

That may not be very far from what the future might look like. Gas guzzlers will never go away, but as the price of gasoline will inevitably rise as the supplies eventually dimish a lot less people will want to drive them. It'll be a luxury reserved for the rich and those who restore or keep servicing old classics. Many will just drive on eletricity and some may opt for a fuel cell vehicles. Some will stick to ethanol.

It's just sad that the legislators (fuelled by lobbyists) try to prevent this future of modified vehicles. Let's just hope that tide will turn without the need for a anarchist future like the one depicted in Looper as well.
Lähettänyt jsantala Ei kommentteja: 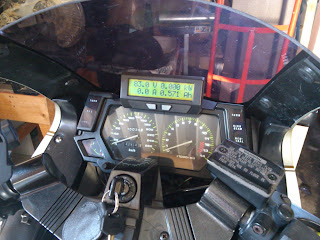 It looks like spring is coming. For a nothern motorcyclist the sure signs are increasing amount of dry, ice free asphalt and the accompanying urge to tinker with two wheelers to get them ready for the season. Today I finally did something I had been thinking about since I got the bike inspected last summer. The Cycle Analyst was placed in a less than optimal location below the lock and rather badly in the way, not to mention hard to read while driving. Now it has moved to a better position above the original instrument panel. Looks very good and should be much more user friendly. Good times.

ps. I also lifted the bike on it's center stand, gave the motor a little spin and checked the cells. All came in at 6.56 or 6.57 volts a pair. I'd call that pretty well balanced.
Lähettänyt jsantala Ei kommentteja:

Let's go over the basics again. Top Balancing is based on a belief that you can fully charge a cell by charging it to a certain voltage, say 3.65 volts, and just keep it there. To get a complete pack "balanced" would require to charge until all cells are at 3.65 volts. To do this some cells need to be kept at 3.65 volts while others catch up. That's all part of Top Balancing and what many BMS do.

So how did they come up with this system that many people swear by and even think to be absolutely necessary? They probably don't know themselves, but here's how I think it must have happened. We know that a LiFePO4 cell likes to stay within a certain voltage range. Go below 2.5 V and you start hurting the cell. Go above 4 V and you're definitely hurting it. To charge a battery you put current into it and since you know you don't want to go over a certain voltage you stop when it's reached. This was 4.2 V in the beginning, but I guess they've found it a little too high since 3.65 V is what most recommend now. They also found out that if you taper the current you can put a little more energy into the cell while keeping the voltage at 3.65 V.

Now think of Lead Acid for a moment. In Lead Acid voltage is voltage and voltage is charge level. You charge and you keep trickle charging your Lead Acid batteries, they'll be happy for it and you get a nicely Top Balanced Lead Acid pack. The more energy you can put into them the happier they are and the more range you will get from you Lead Sled.

Now if you put these two things together, maximum charge voltage and Lead Acid heritage, what you get is Top Balancing and what usually is considered to be a Lithium BMS. To prove this they talk about stuff like Cell Drift and Self Discharge. I really don't know how they came up with them, but it must be from Lead Acid heritage as well. Or maybe they put this Top Balancing BMS on their cells, kept recording the voltages and noticed that they vary and the cells will Self Discharge.

What they didn't think of was that they had the BMS connected the whole time and both phenomena were actually caused by the BMS itself. If you put any Cell Level system on your cells that's not very, very carefully designed not to draw any (and I do mean any) current, you will see the cells react and they will react differently. You will place on uneven load on the cells that will cause "Cell Drift" and the load itself will be the "Self Discharge" you see. To make matters worse, if you Top Balance and keep cells at 3.65 V while other catch up, you will damage your cells and damage them by different amounts, which will only inflate the problems you think are caused by the cells themselves.

So you're discharging and discharging and your first cells hit the cut-off voltage. You have to stop now, or you'll damage those cells. And you'll better be quick about it too. Stop the car immediately. If you were smart you had already put the vehicle into a Crawl Mode, so that you could pull over safely. Unless you've kept a really good track of previous full discharges you won't know when your first cells will be empty and when you should start crawling. Doing so gets really complicated and expensive really fast. Add in all the single cell level monitoring, shunts to enable Top Balancing and it's not really hard to imagine why those BMS systems are so expensive.

Hopefully I've by now convinced you of the problems with and caused by Top Balancing. I'd really like the whole world to get a clue on this, including Boeing and the BMS people at Sähköautot - Nyt! forum, but I don't have my hopes up. What's amazing is how firmly rooted these false beliefs are. It may just be that a lot of people have too much invested in BMS systems to admit there are issues. It sure does seem like a lot of people are looking to make a buck on these.

I guess I still have the obvious question unanswered. If Top Balancing doesn't do what people think it does and if it doesn't really solve anything, what is the answer? How about if we try something quite opposite. Instead of trying to Top Balance the cells we drain them as empty as we dare. 2.5 volts is a little dangerous so let's say 2.75 volts. Let's call that empty, or close enough.

Now if we have all of our cells empty and we connect them in series with just the interconnects we have an empty pack. What happens if we charge them? They will all receive the same amount of current. They're all a little bit different so they absorb their share a little differently, but it doesn't matter. We don't like any cells to go above into dangerous territory so we undercharge a little. We don't even pretend to get all cells at exactly 3.65 volts. Most end up a little below and some may even go a little higher, but it doesn't matter. We accomplish this by charging the whole series pack to cell count times 3.5 volts. My experience is that even with this undercharge you will end up putting as much or even more energy into the cells than what they are rated for.

What you've in essence accomplished by this Bottom Balancing is that you've zeroed all the differences between the cells, whether it be capacity or internal resistance. When you discharge the cells they will do the same thing in reverse that they did when you charged them and if you keep discharging them they will all end up at the same voltage you Bottom Balanced them at. In other words they will both charge and discharge very close the same way. Close enough that it doesn't matter. As a bonus you don't have to keep track of your cells. You'll now exactly how many Ah went into the pack when you charged it and you know exactly how much you can take out. And once those cells hit that 2.5 volts, all together, at the same time, they will be putting out hardly any energy at all. And since they're all empty they can't force each other into destruction.

Disclaimer: All of my battery ramblings are based on my own experience and Jack Rickard's findings. They are applicable to CALB SE- and CA-series cells. Other cells and chemistries may at least require different voltages.
Lähettänyt jsantala 3 kommenttia: 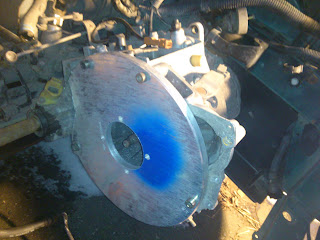 The really bad, quick and dirty cell phone photo above depicts the current state of affairs at the kWsaki EV conversion industries. A very kind forum member from the VMPK forums sent me a 350 mm disc of about 17 mm thick aluminium that I was (barely) able to drill a few holes into. Only destroyed an electric drill in the process of making that big hole in the middle, but hopefully I can make this work. Next I'll have to figure out the coupling between the motor and the flywheel. I intend to keep the clutch as a safety feature, if nothing else. Don't worry, I'll make it look all pretty and black eventually. 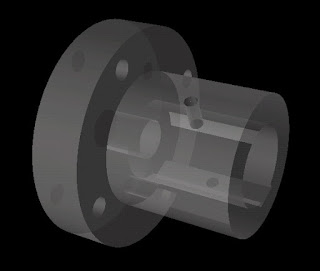