I finally had a chance to install four more cells into the kWsaki electric motorcycle. Actually, take four old cells out and put eight new ones in. Good that I did, because taking out four of the old cells I found two of them slightly bloated and below acceptable voltage. The other one was below two and the other below one volt. Not happy cells.

Both were cells which I had earmarked for observation before, with letters "A" and "X". I also took out cells marked "B" and "D". I've only marked cells which have seemed dubious at some point, either for going high on recharge or low on full discharge. Hopefully I caught all bloated cells and none were left in, since I didn't really go through the rest of them. It's hard to say at which point these got damaged, but I'm hoping they just developed issues while I pushed the pack really low right before doing the swap. At least I didn't notice any issues before. 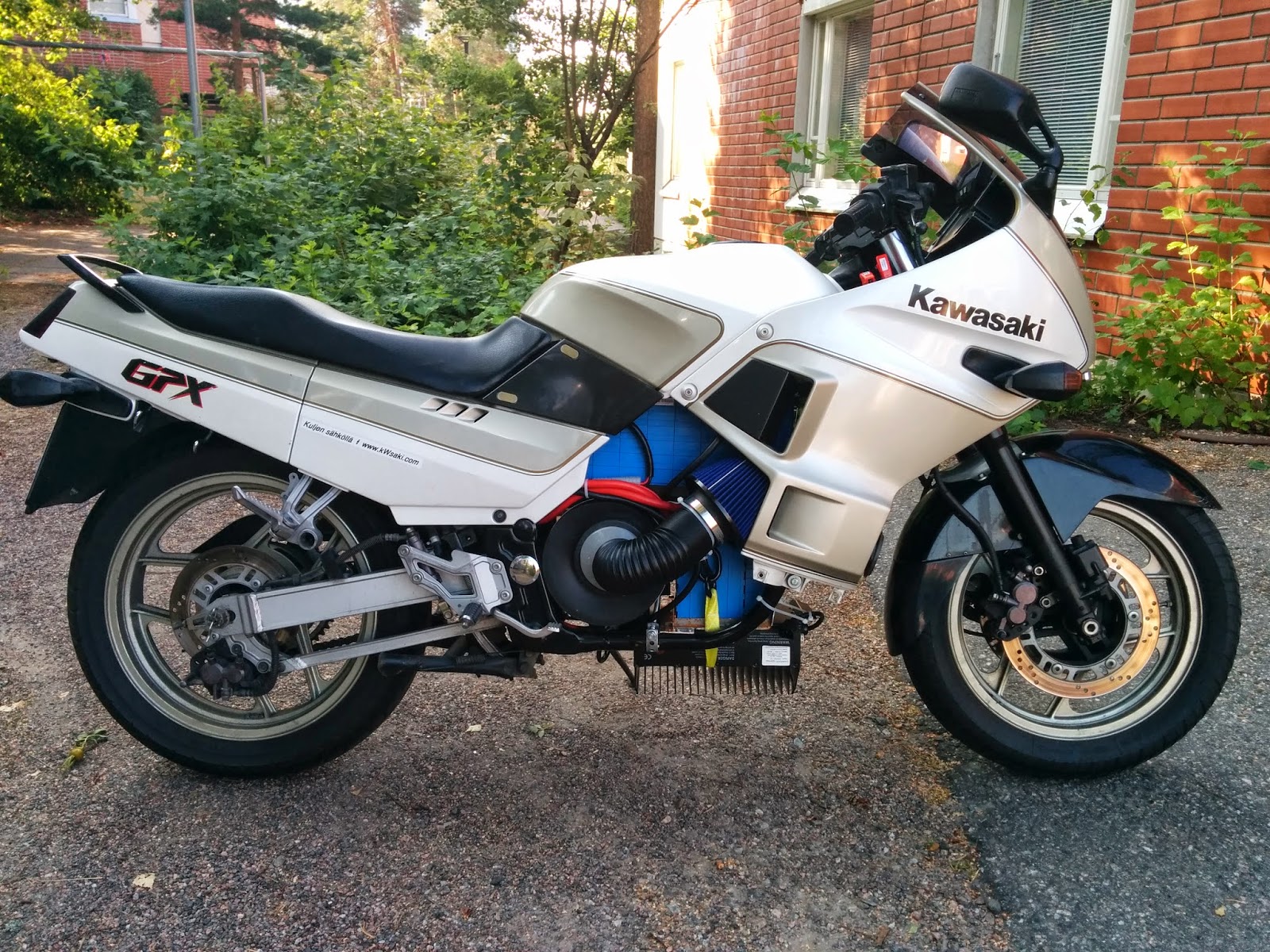 The other thing that I did was to attach the new 102V 21A charger to the belly of the bike. It looks just about as ghetto as can be and it rather is, but it works and it'll look prettier once I modify the belly pan to fit back on. In any case, the charger works and charged the battery from the new empty voltage of 83.8V, which is just a hair above my previous fully charged voltage, to 102 volts and bit over it. Strangely it wouldn't stop charging even when the Cycle Analyst registered a charge current of less than one amp. The highest voltage I noticed was 102.5 volts. I suppose it would stop at some point. The measurement at such low levels is not very accurate and the little laptop PSU doubling as a DC/DC converter was also running, which may make a difference as well. 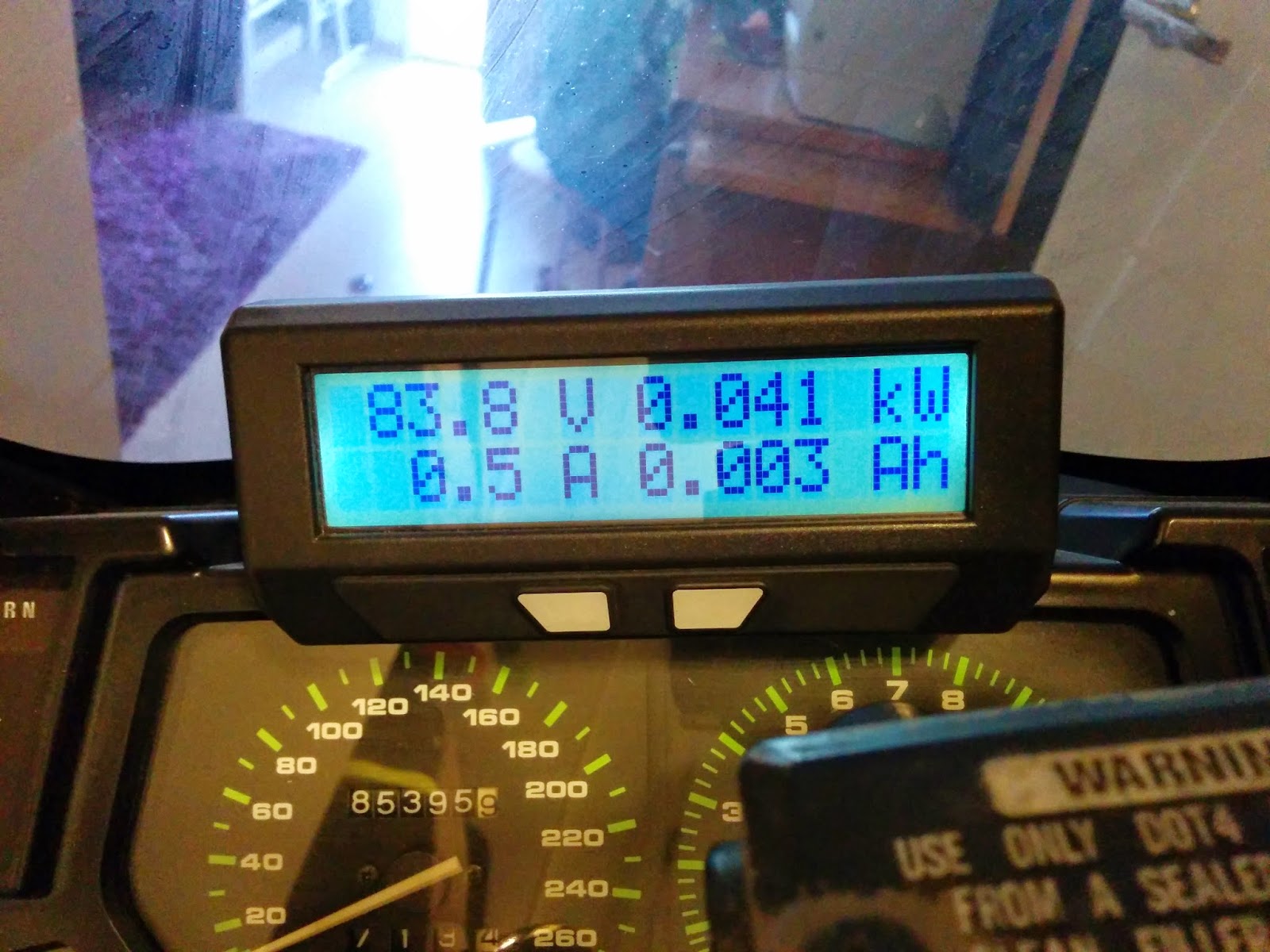 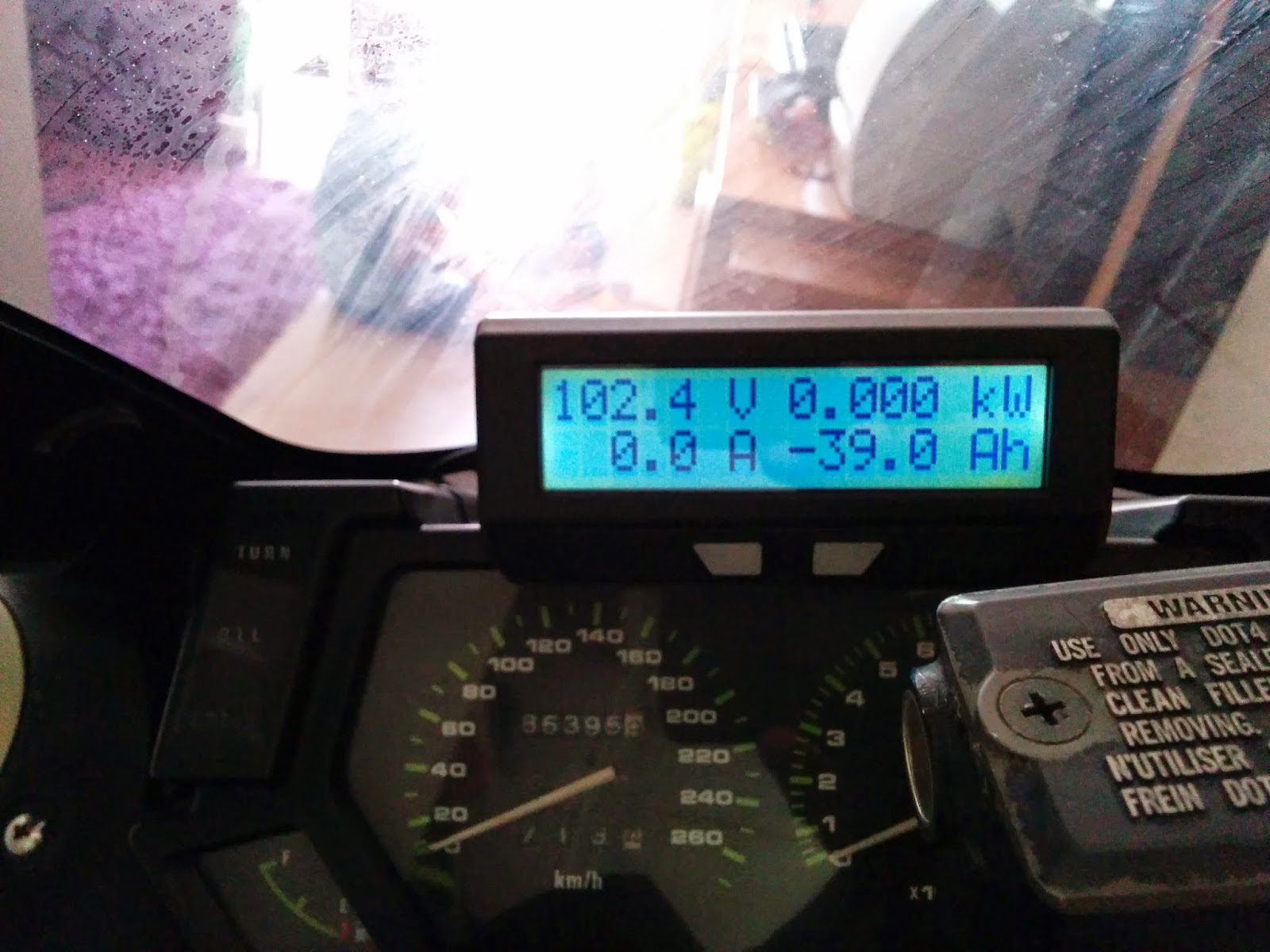 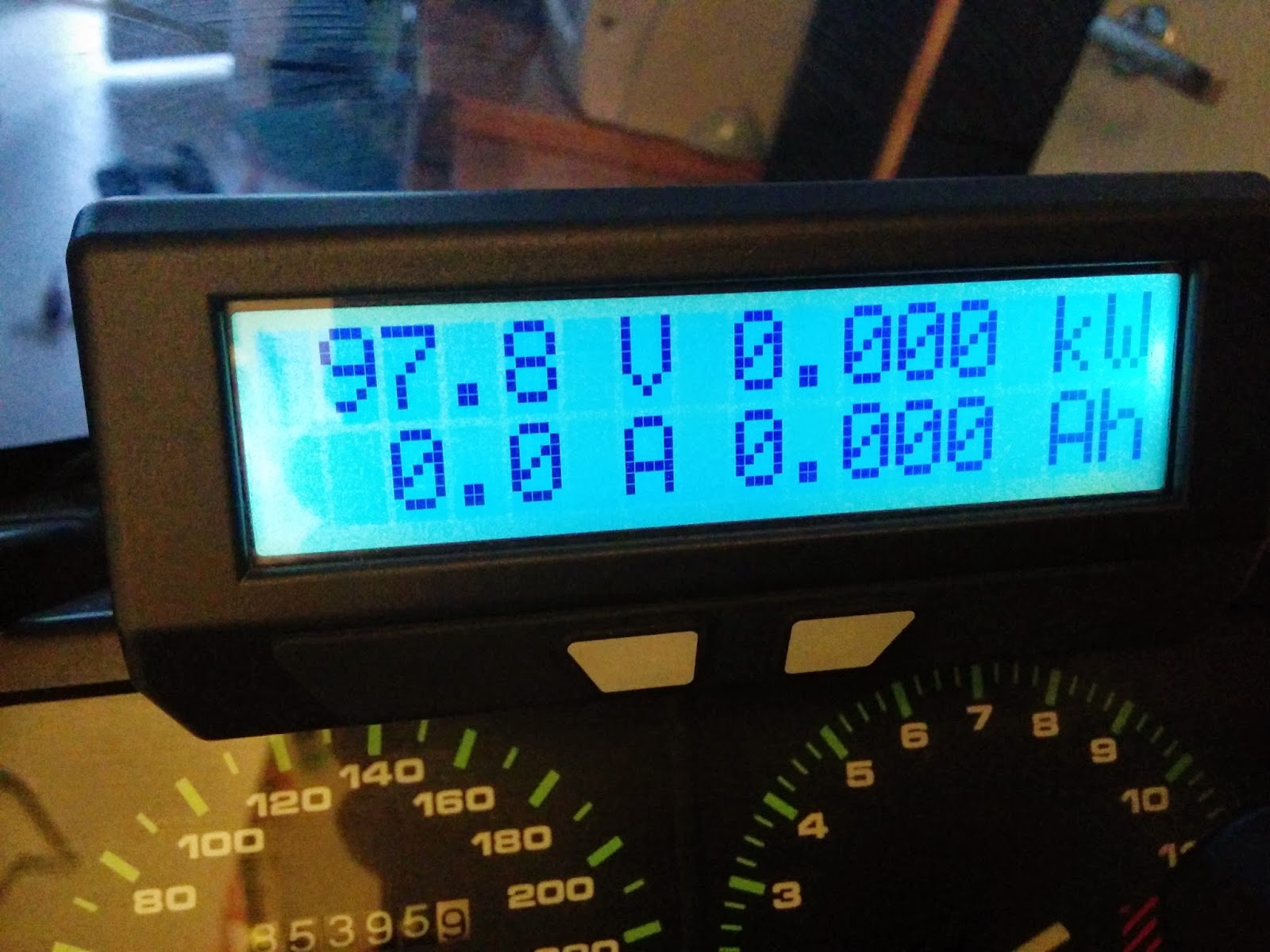 When I pulled the plug, 39 amp hours had gone in to the pack. Just one amp less than rated capacity. I think this is a good results, since most of the cells are now over two years old and I'm not charging them fully anyway. The next morning the pack had settled to a total voltage of 97.8 V. I'll have to get used to that number now.

I also got to do a little test drive with the new pack. I have to say that the bike felt better than ever. Even with the added weight of four more cells and the rather big TCCH/Elcon 2.5 kW charger, acceleration was brisk and it just felt very peppy. Especially so on the freeway, where the speed would start to run out at 100 km/h, it now did so around 120 km/h instead. I managed a new top speed record of 128 km/h. Up from the previous 110 km/h or so. In other words just a little faster than you are allowed to drive anywhere in Finland, so I think it'll be plenty. 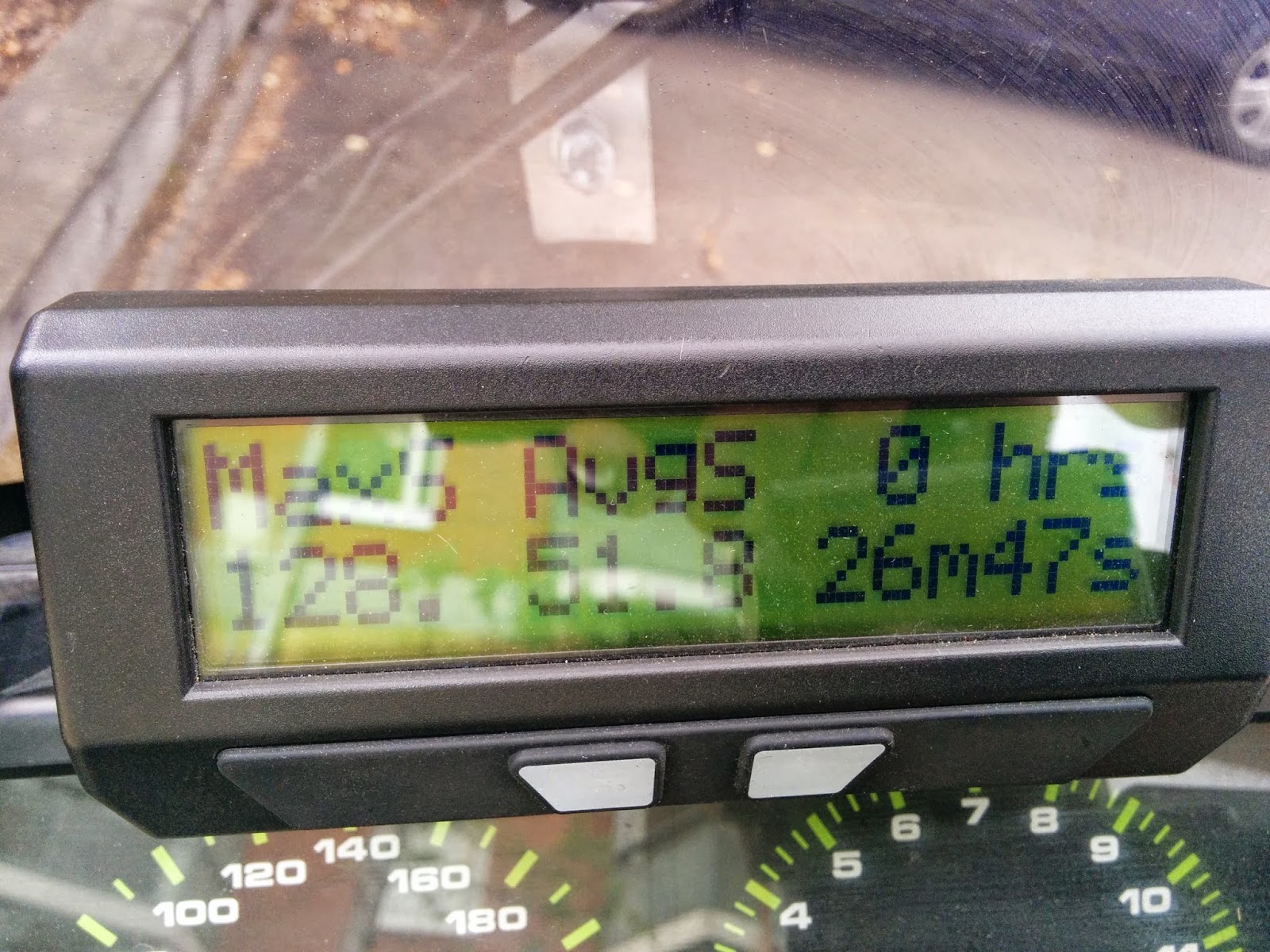 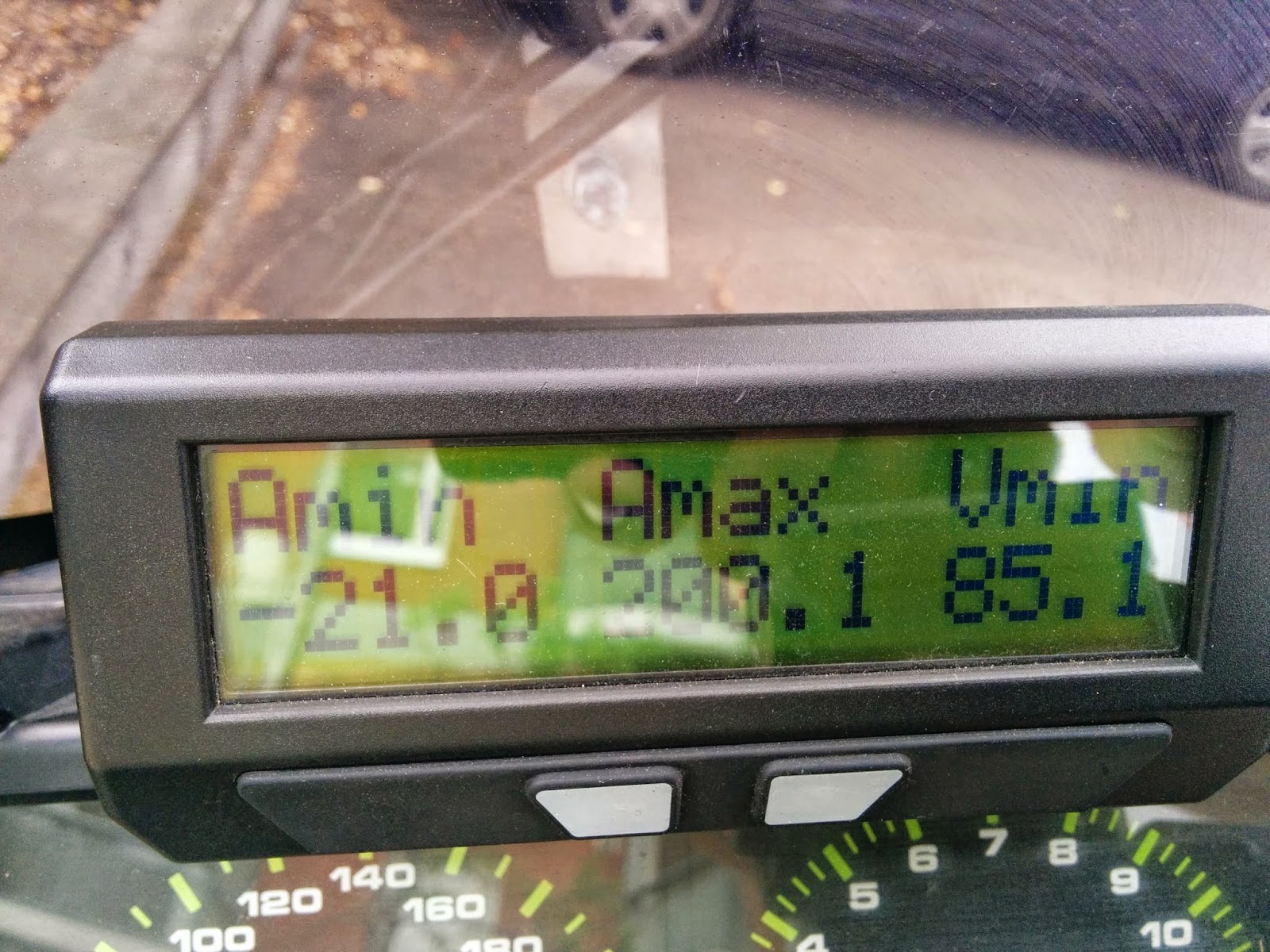 The Kelly controller I now have in the bike seems to be also doing thing a bit differently from the Alltrax AXE I had in before. Where the AXE would suck amps probably as much as it would put into the motor, the Kelly pulls a lot less. Even with the 600A controller set to 85% output, or 510 amps, it had only taken up to 200 amps from the pack. This was during the test drive I did the new speed record with, so it definitely was putting everything it was allowed to into the motor. In any case, it's much better this way, so I'm not complaining. The batteries can take it a little easier and I still get full power.
Lähettänyt jsantala Ei kommentteja: 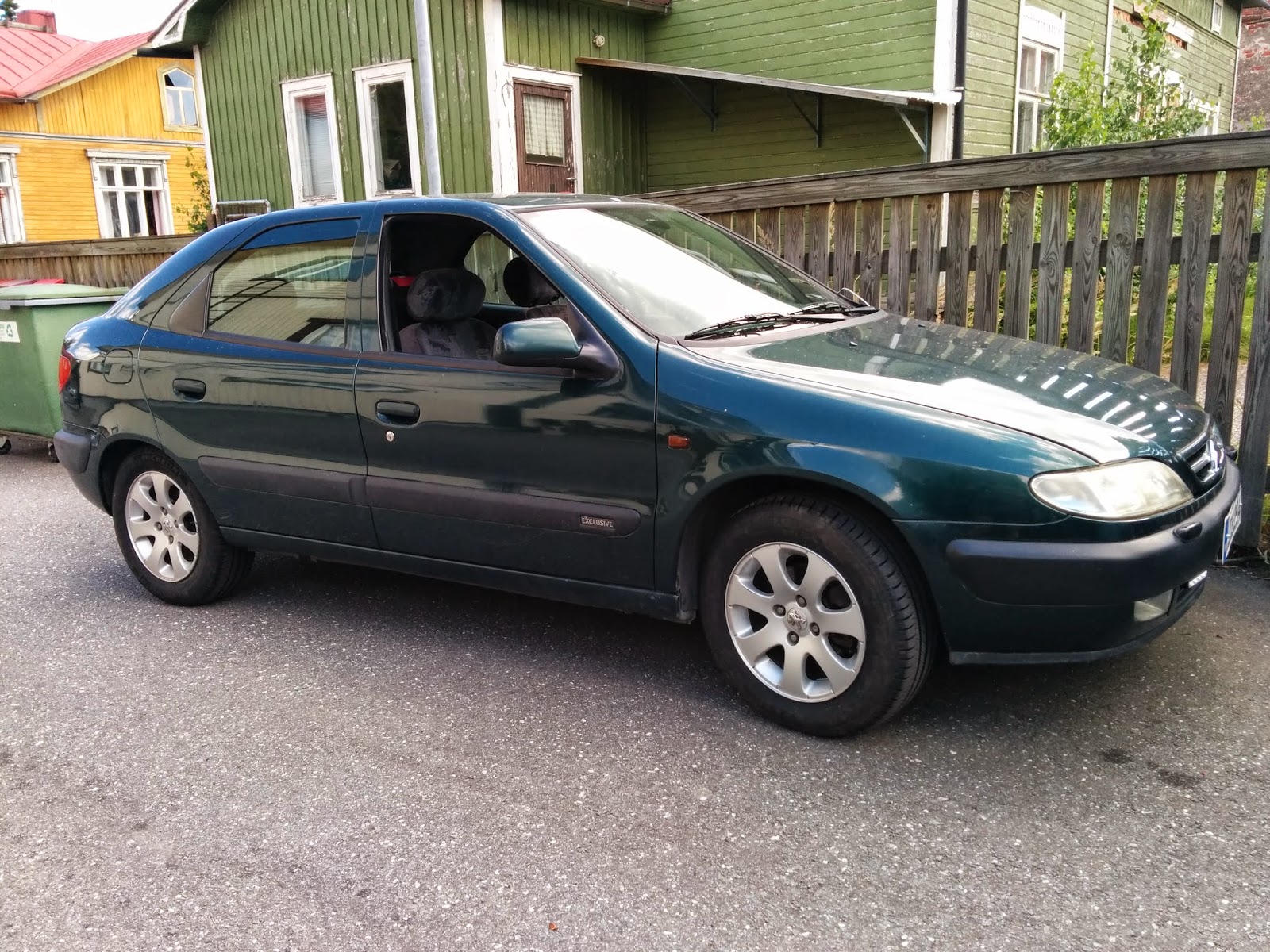 The rims that were too good to be true.

So I got those rims from a Peugeot 307, the same car I use for long distance travelling, and purchased 195/65R15 Michelin Energy Savers for them. They seemed quite nice under the kWsara and were dead silent, but alas, it was not meant to be. Hitting a bump made a nasty sound and in the end I just had to back off and get 175/65R14 tires for the original 14" steel rims. They didn't have Michelins in that size, so I chose Continental Premium Contact 5s. They're not quite as quiet, but still a lot quieter than whatever old tires I had on previously.

I'll use the Energy Savers on the alloy rims in my 307 probably next summer, when my current Nokian Hakka Greens are probably starting to run out, so it's not a real loss to have those two sets around.

I just can't emphasize enough how quiet the Michelin Energy Savers are. Definitely my go-to tire as of now.
Lähettänyt jsantala Ei kommentteja:

Yesterday, I finally got the new charger for the kWsaki. DHL and their local agent tried to make it as complicated as possible, but finally I just drove to their warehouse at 17.20 on a Friday and picked the damn shipment myself. Luckily they were still there. I think I'll specify pickup from there now on. 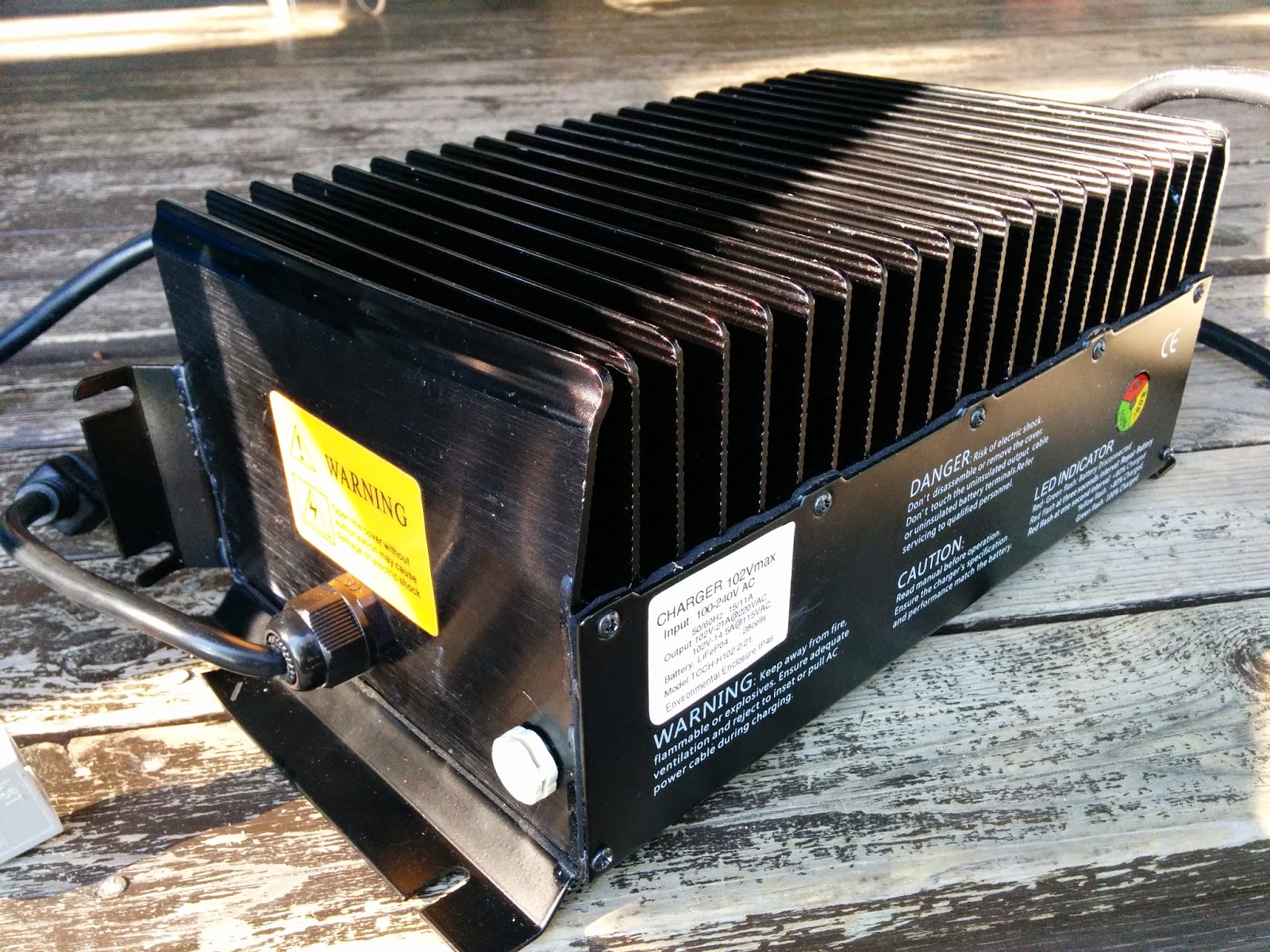 In the usual evassemble.com fashion, the charger was very lightly packaged and once again came in a little damaged. This time it was one of the cooling fins. Shouldn't be a problem, though. It's a little bigger than I thought, but I still believe I should be able to fit it under the frame and within the bottom fairing. 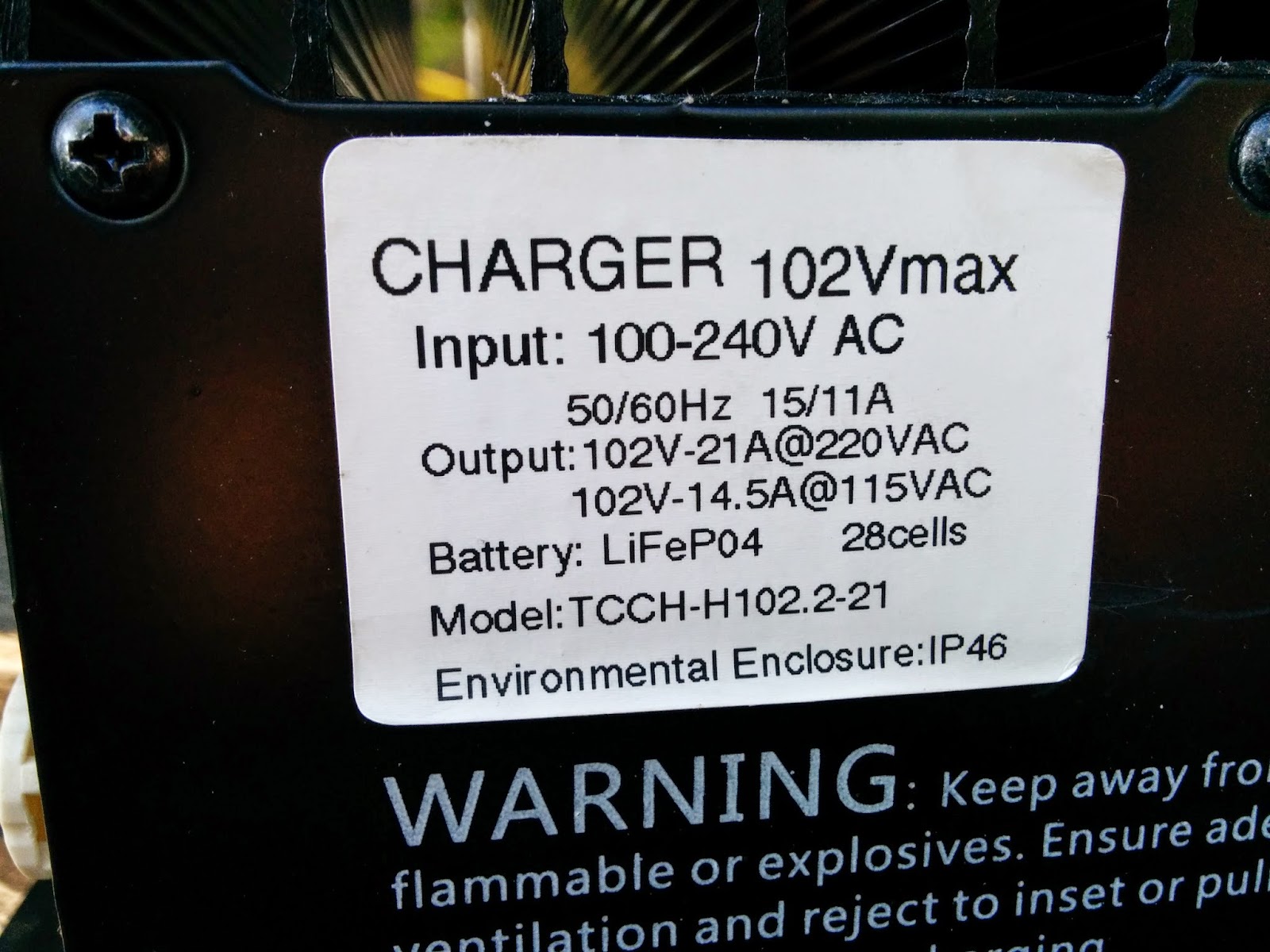 The charger seems to have been correctly configured, at least according to the sticker. It says 28 cells, but I'll use 29 instead. I just didn't want to complicate their life by specifying anything out of the ordinary. 102 volts divided between 29 cells comes down to about 3.52 volts per cell. The charger, charging at 21 amps, should fill my 40 Ah cells in about two hours, while using 11 amps at 230 VAC. 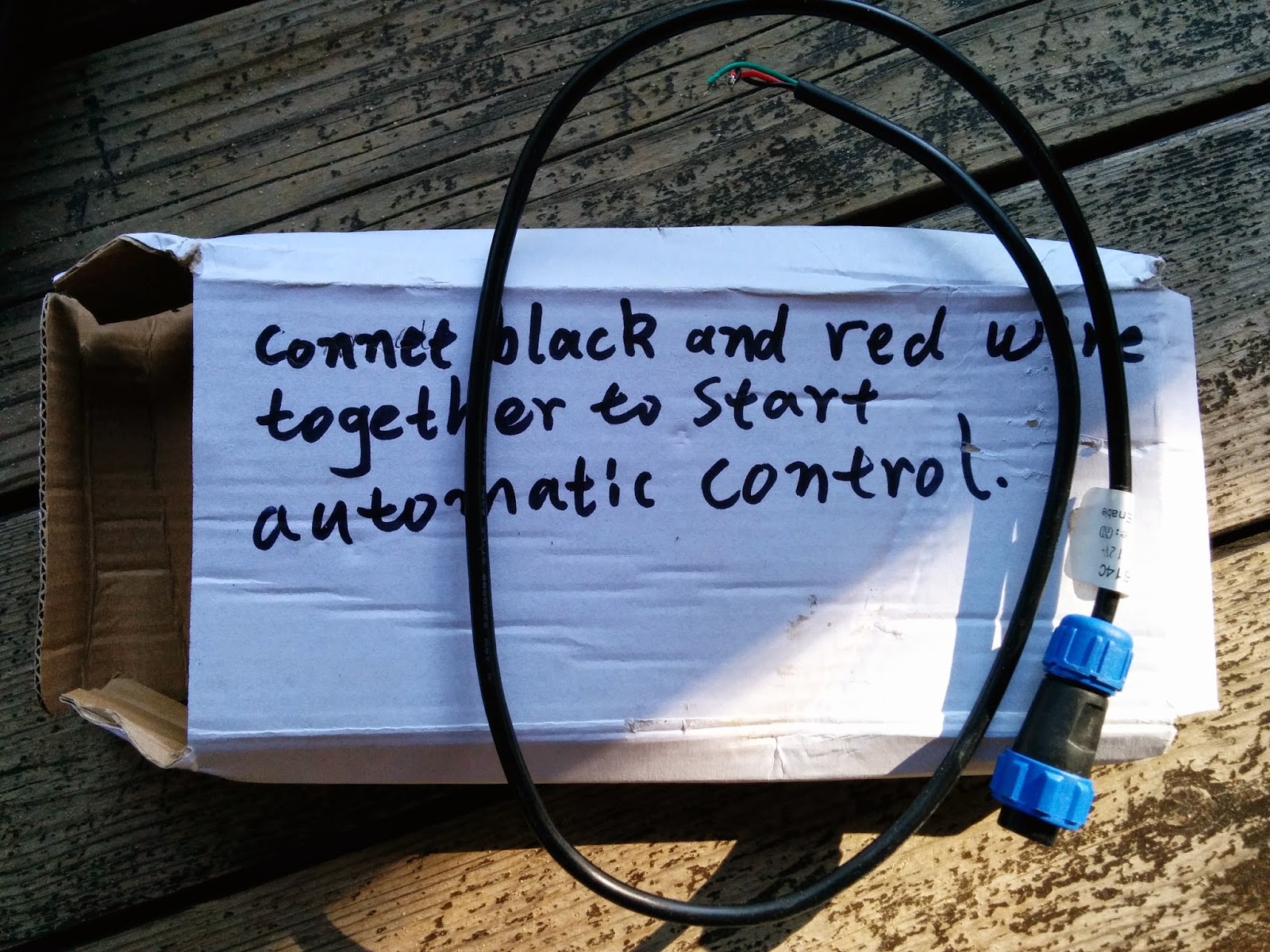 Look! It came with instructions too! "Connet black and red wire together to start automatic control." Yes, that was the only documentation in the package. In that box there was the control cable which the comprehensive documentation refers to and an additional Anderson connector. Most likely I'll just leave the Anderson connectors out, because they're mostly just asking for trouble.
Lähettänyt jsantala Ei kommentteja:

While doing the battery test drive for the previous post we also had the hottest day of the summer so far. Temperatures were around 28 degrees Celsius. Very hot for these parts. Just last week we had more than 10 degrees less, albeit it was particularly cold then.

The DC/DC converter wasn't really even warm, but the aluminum sheet that both the controller and the converter are attached to did show temperatures close to 50 degrees, so it was working as a heatsink as planned.

As for the batteries, in their closed and rather insulated case, were also noticeably warm to the touch. My infrared meter showed them at around 50 degrees. Kind of approaching uncomfortable zone, but not reaching it. I did however check how the temperature reacted while charging. It didn't go up, but instead came down to 45 degrees rather quickly and I didn't notice it going back up. All good then.
Lähettänyt jsantala Ei kommentteja:

Yesterday I took it upon myself to see just how far I could get with just the single set of 60Ah CALB SE cells that I currently have in the car. That part of the equation is rather clear. It's 25 kilometers or a little over 15 miles. How much energy was used, now that's a different question altogether.

I did measure the amount of energy used by the charger to charge the pack from quite empty to 87.6 volts or 3.5 volts per cell, with a CC/CV charge pattern. The result came in at 5.8 kWh. Now I don't know how accurate my cheap watt meter is, but if we assume it's anywhere near the thruth, the mileage from the wall was 232 Wh/km. Not bad, considering it was mixed city driving and no regen.

I suppose that's actually the most realistic way of measurement. After all, it determines how much you'll end up paying for your kilometers. That comes down to a little over 2 cents per km with our electricity prices, by the way. Or 2,32€ per 100km.

My Cycle Analyst however sees things quite differently. It measured 62.6 Ah into the pack and 87.8 Ah out while driving. It's obviously not counting the Coulombs quite correctly. I'll have to try and figure out why that is and make the numbers match. For now, I know I can drive the car quite a bit further than the Cycle Analyst numbers would indicate.

As for the range, the 25 km for a 25 cell pack of 60 Ah cells is pretty much dead on for what I had guesstimated beforehand. Doubling the cell count should double the range and give me the 50 km I had in mind originally. That's about 80 € per kilometer in battery cost with these cells.
Lähettänyt jsantala 2 kommenttia:

Well, some speed at least. I did a little top speed test with the kWsara a couple weeks back. It was raining cats and dogs, so the circumstances were far from perfect. Nevertheless, I reached a top speed of 84 km/h (or 52 mph) on fifth gear while consuming approximately 22 kW. Not a whole lot, but rather predictable though.

The car was a petrol model, which revved several thousand rpm, so the gearbox has rather low gearing for the electric motor, which only likes to rev 2000-3000 rpm. So when 1000 rpm equals about 35 km/h on the fifth gear, you end up with less than 90 km/h at 2500 rpm. Other factors include voltage sag, which may have an effect since I still only have single set of 60 Ah cells in, and the tires, which are now the stock 185/65R14.

I'll get more cells before long to keep the voltage as high as it can be and I also just today picked up these 15" rims. They're meant for a Peugeot 307, just like my daily driver, but should also fit the Xsara. Both vehicles are from the same parent company, PSA, anyway. I'll get 185/65R15 or 195/65R15 tires for them at some point. That should increase the top speed by some 10-15% as well. 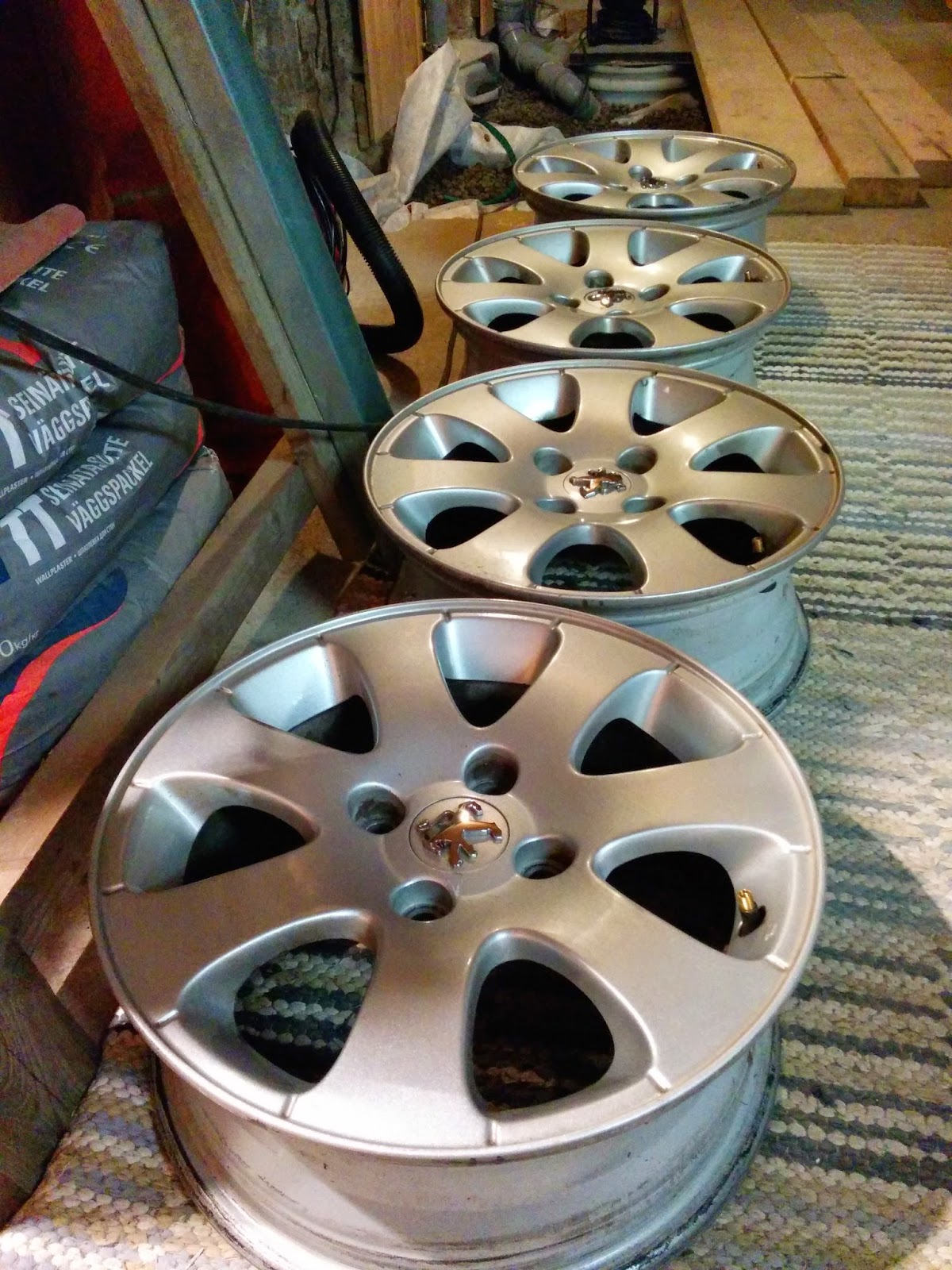 I know, the rims have the Peugeot lion on them, instead of the Citroën logo, but as I said, they are made by the same company. Also I don't really care.

For a bigger increase in top speed I'd have to spring for a transmission from a diesel model, but changing transmissions... Well, not my cup of tea.
Lähettänyt jsantala Ei kommentteja: