A little improvement to the Leaf heater switch

I added a little hack to the Leaf heater on/off/half power switch I installed earlier. The Leaf hacker who made the switch into a kit published a video about some improvements to the system and mentioned that there could be a way to bypass the switch when the car was pre-heated. I pretty much immediately figured that if I were to add a relay powered by the 12V AUX outlet that would do it. The AUX outlet only has power when the car is on, but not for example while pre-heat is activated. He later went on describe the same idea on video. 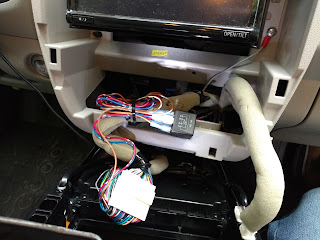 Today I finally got around to adding the relay. The wires going to the 12V outlet were a bit hard to get to, but I managed to add a vampire clip to the positive wire. The negative wire I ended up connecting to the ground on one of the bolts holding the infotainment screen in place. Then it was just a matter of running two of the wires going to the switch (not the brown one) through the relay and that was it. Come to think of it, I guess I could also have run just the brown one, but the end result is the same.

Now I don't have to worry about which position I left the switch - pre-heating will always work. The very useful hack is now even more useful and user friendly. It's good to have less things to worry about and it might just save me a couple of trips to the car which I would have done just to check the switch position.

Oh, I also added a switch the EVSE I made. I can now switch between 6 and 16 amps using that EVSE. Together with the original 10 A cable I now have three levels of power to choose from and still have a backup cable in case one of them breaks. Good times.
Lähettänyt jsantala Ei kommentteja: