We've been driving about in the EV for a few days. Just short trips to parents-in-law's for Sauna and flea market in the 6th city district. Mainly because I a bit of an issue with flywheel balance. I'll probably try to get hold of a another compatible flywheel and have a new adapter made specifically for that and have them spin balance the whole thing as one. That should give me a little bit smoother ride. 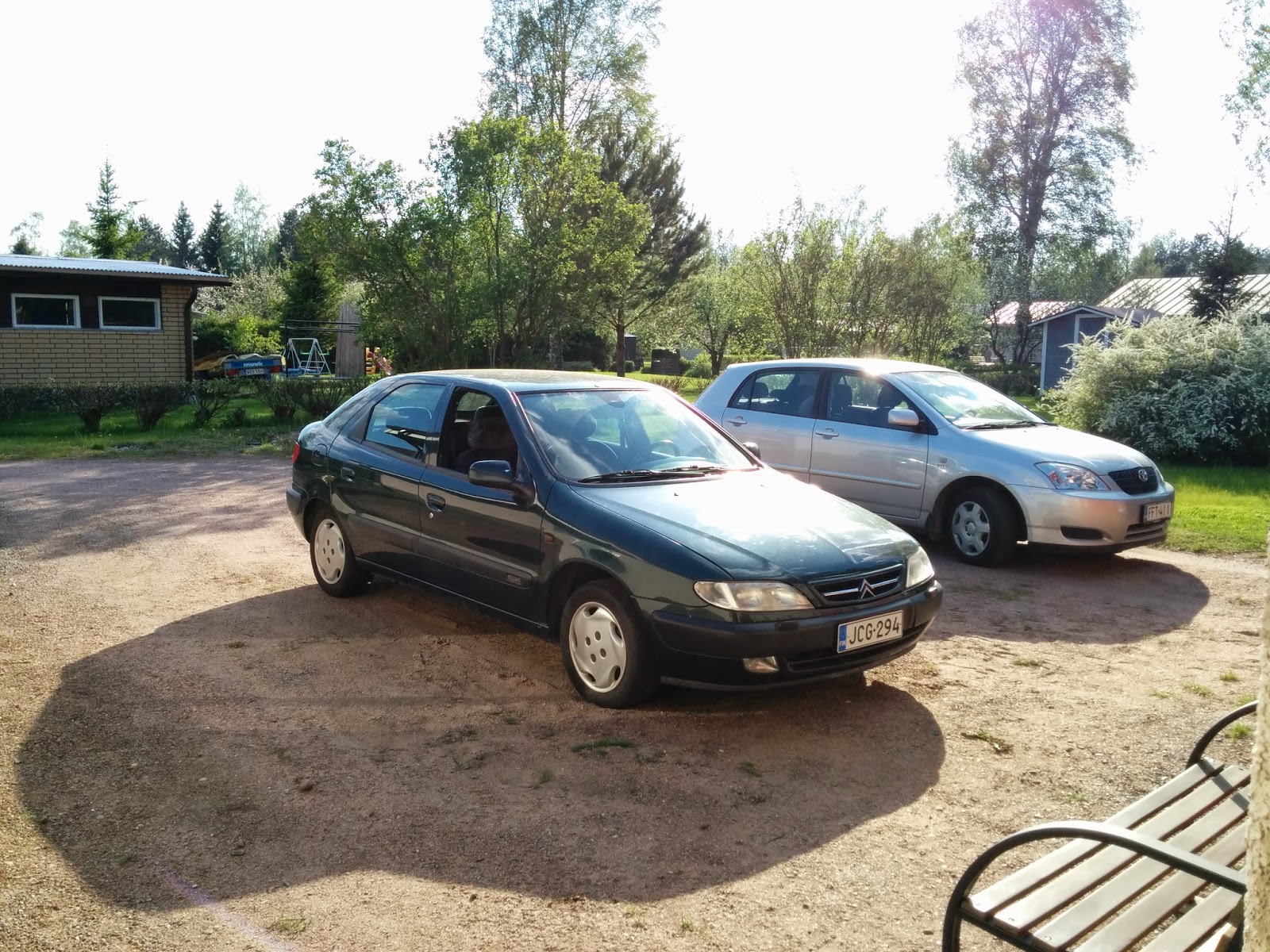 It's still already cool to drive about in a almost zero carbon way (we currently buy hydroelectric power) and hear all the noises around you while being dead silent at stops. Not bad, not bad at all. 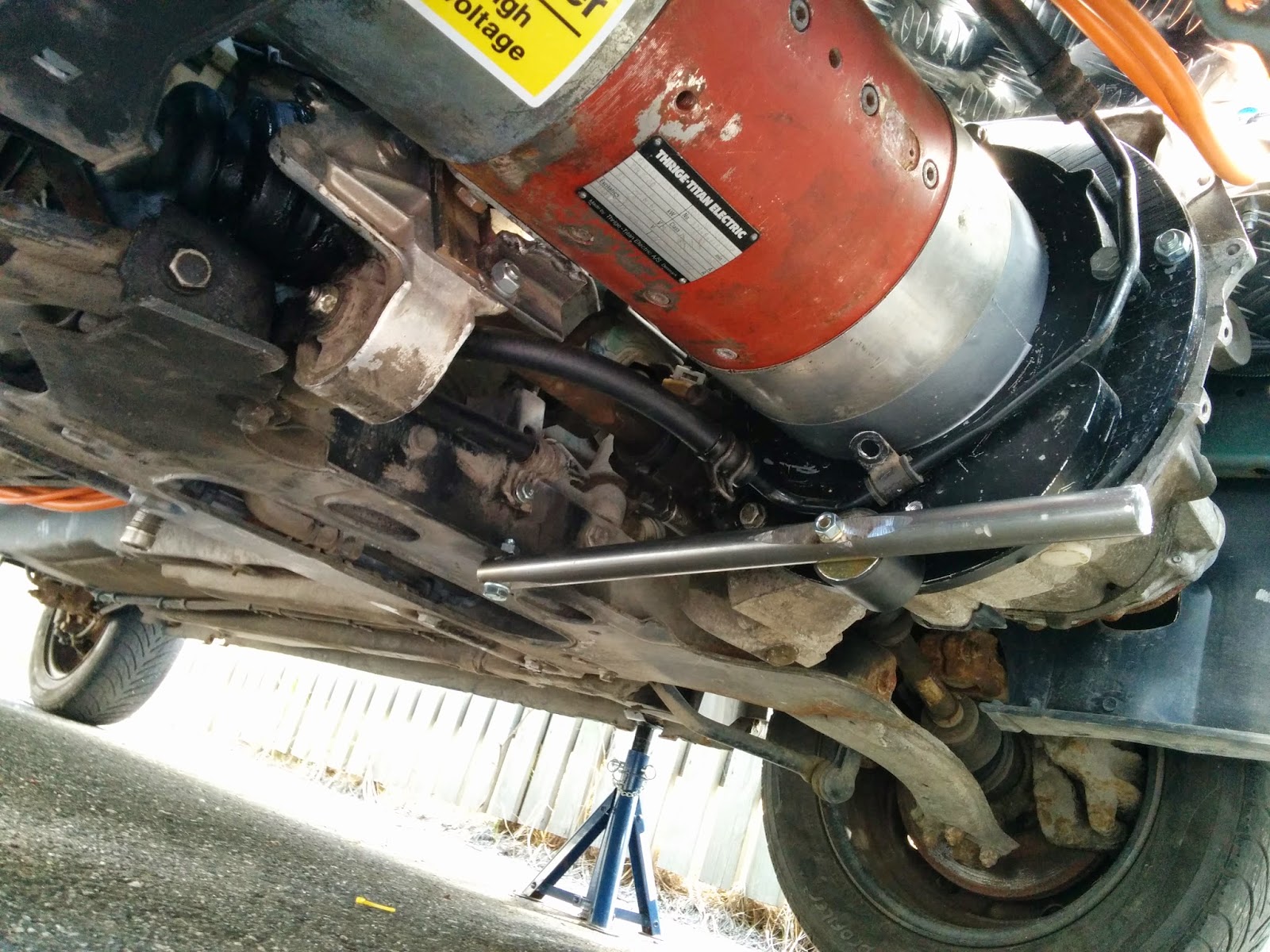 The additional fourth support arm of the electric motor drivetrain that I just added seems to be working perfectly and stops the motor from rocking backand forth violently. It'll be shortened and all prettied up... someday. 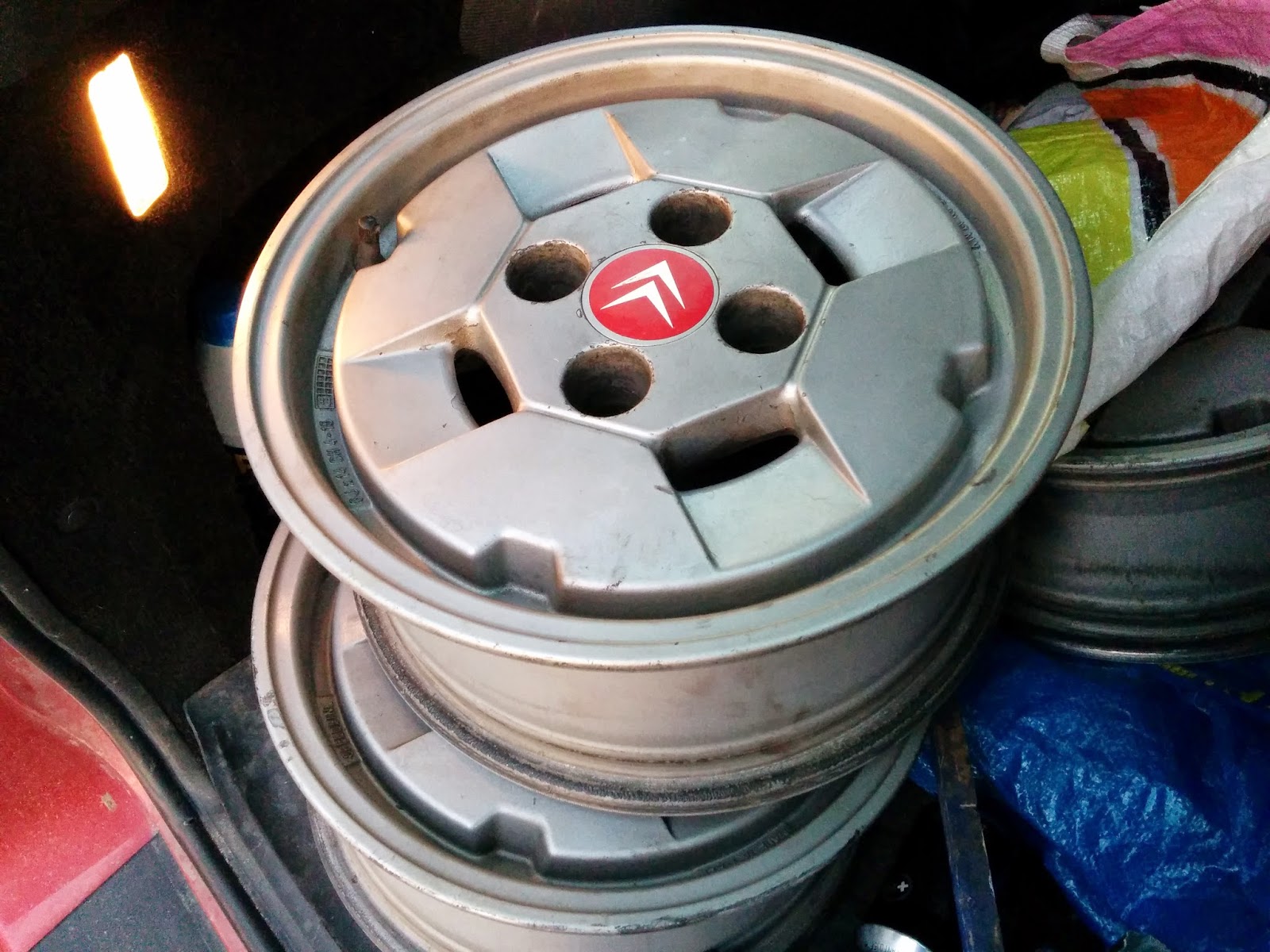 I got myself some retro rims today. They need quite a bit of work to look all shiny and pretty, but I got a good deal on them. Whether they'll ever look pretty depends on the eye of the beholder, I suppose, but they suited my sense of whimsy, as Jack Rickard likes to say. They don't seem too bad aerodynamically. At least compared to a lot of rims out there. I'm pretty sure they'll fit into the Xsara, but I'm not a 100% sure. I guess we'll find out soon enough.
Lähettänyt jsantala Ei kommentteja: 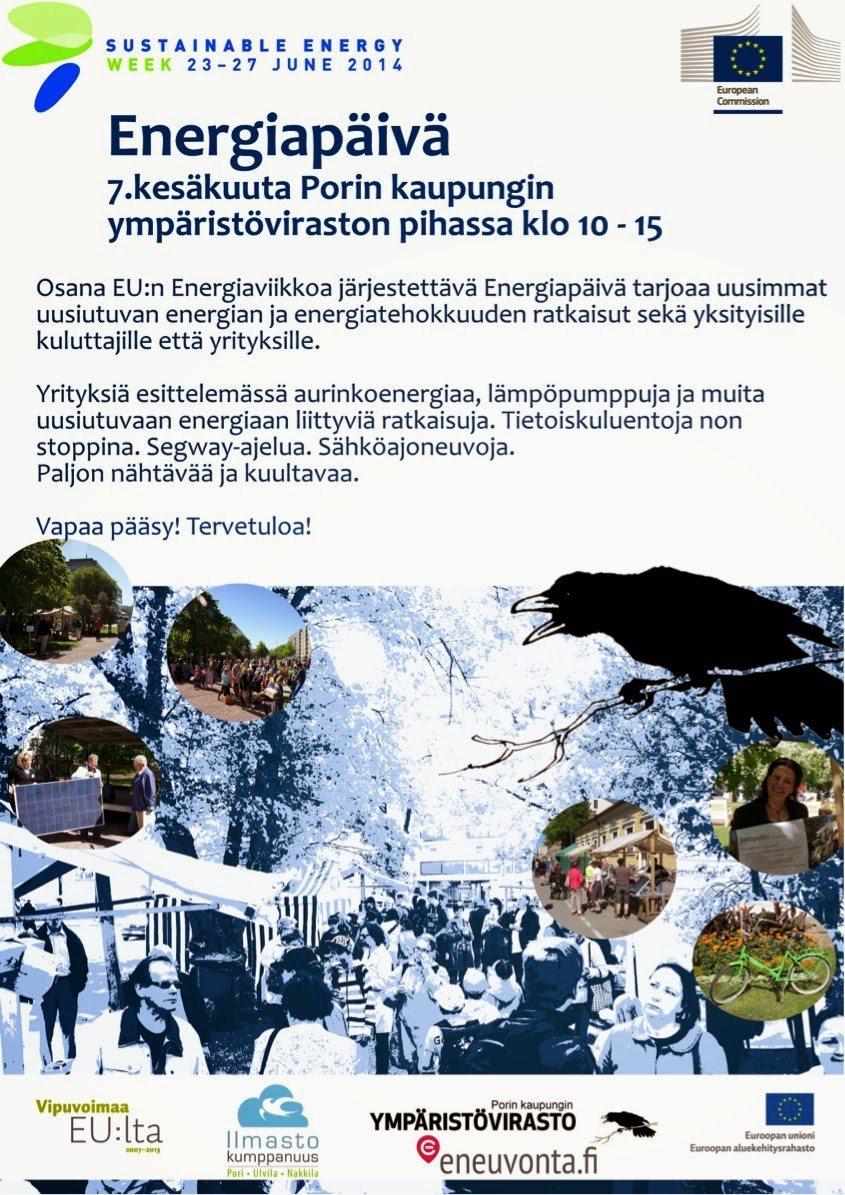 I promised to bring a handmade EV or two to this Sustainable Energy Fair on 7th of June in Pori.

Faith in the system

Some faith in the system was restored today. Trafi had sent the vehicle tax information and to my great surprise they had done the right thing after all and decided to tax the vehicle based on zero emissions! The alternative would have been to tax it based on weight, which is the default for pre-2001 vehicles under 2500 kg.

Actually I now noticed that it actually says so on the Trafi web page:

Autojen, joiden ainoa käyttövoima on sähkö, perusvero määräytyy päästötiedon 0 g/km mukaan.
I hadn't noticed that before and obviously the person I asked this about earlier hadn't either.

The downside is that electric-only vehicles are blessed with a separate tax to counter the fact that they don't use any heavily taxed gasoline. That amounts to 0,255 cents per day for this vehicle, while the base tax is 0,118 per day. 136,14 € total per year.

In any case, at least I'm not getting any extra punishment for converting such an old vehicle. As a bonus I'll save some money in the yearly inspection, since the vehicle needs no emissions tests.

The downside of torque

Well. Turns out what was fine for mounting a relatively huge 1.8 liter petrol engine doesn't seem to work out too well for mounting a tiny electric motor with gobs and gobs of torque.

After a bit of repair work on the motor mounts and making one of the mounting arms out of 25mm or 1 inch steel tube, the non-hollow type, I proceeded to test the car a little. It all ended quite abruptly with a bang and a gear stick that moves back and forth quite freely, but sideways not at all.

I'm really not converting another car with a transverse engine. Ever.

I didn't have time to look into it. I hope the gear shifter has just dislodged itself from whatever it is supposed to be lodged into. I suppose the worst case scenario is that the transmission is stuck into third gear forever. Not that it's a bad gear to be in. Just that reverse is kind of useful too.

I've come to the conclusion that I need another mount point. Currently the transmission plus motor is mounted to the vehicle at three points. Above the transmission on the driver's side, at the end and quite high above the motor at the other side and at the drive shaft of the right front wheel. This setup seems to leave quite a lot of room for the motor to rock back and forth in the engine bay, which results in all kinds of nasty stuff. The sheer mass of the petrol engine must have kept it at bay originally.

I'm thinking of adding a sort of a torque arm from the motor adapter plate to directly towards either the rear or the front of the car, with a rubber mount at the vehicle side. It's the only way I've come up with so far to stop the damn thing floating about. We'll see what I end up with.

Yesterday was the day. 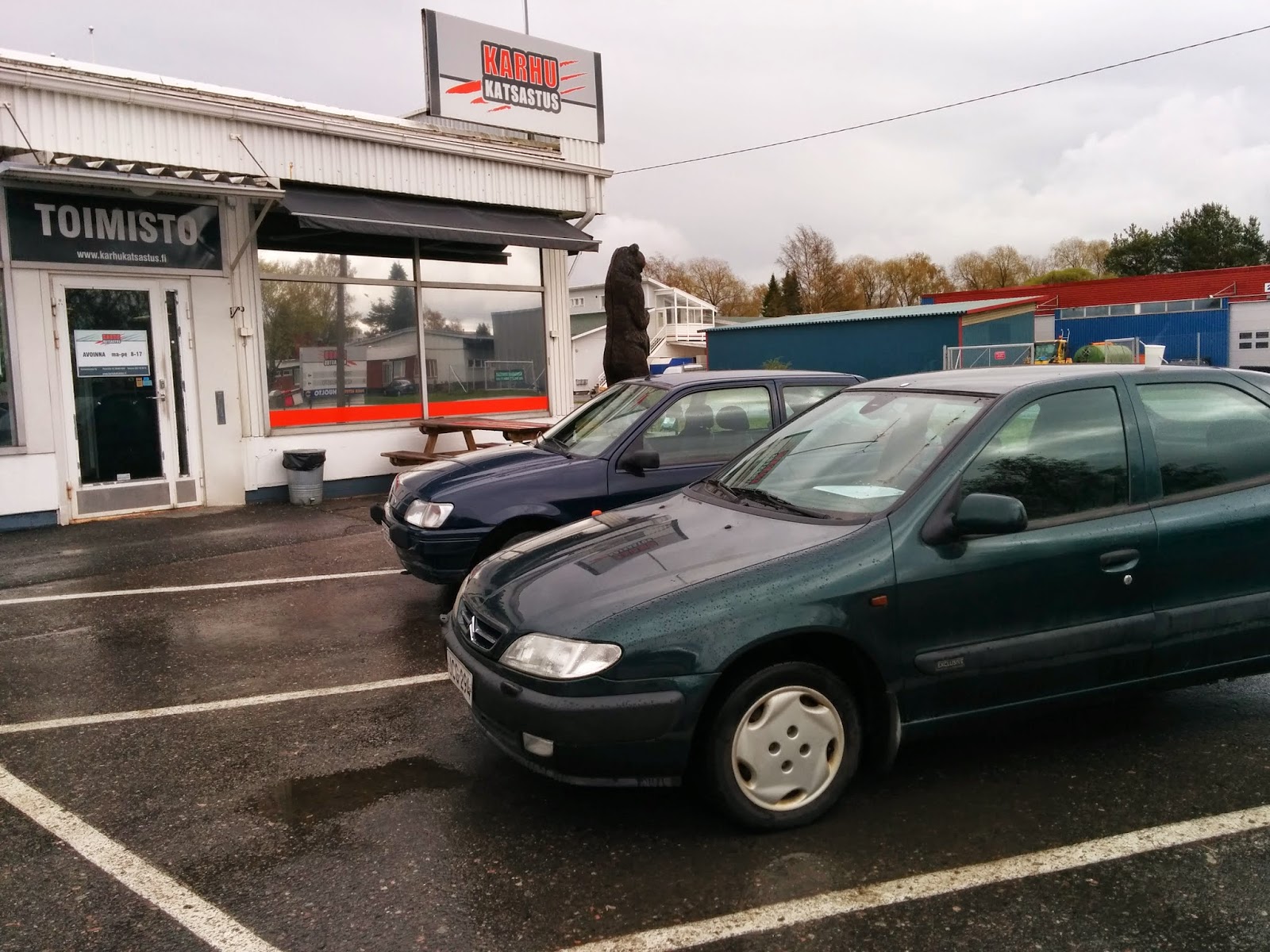 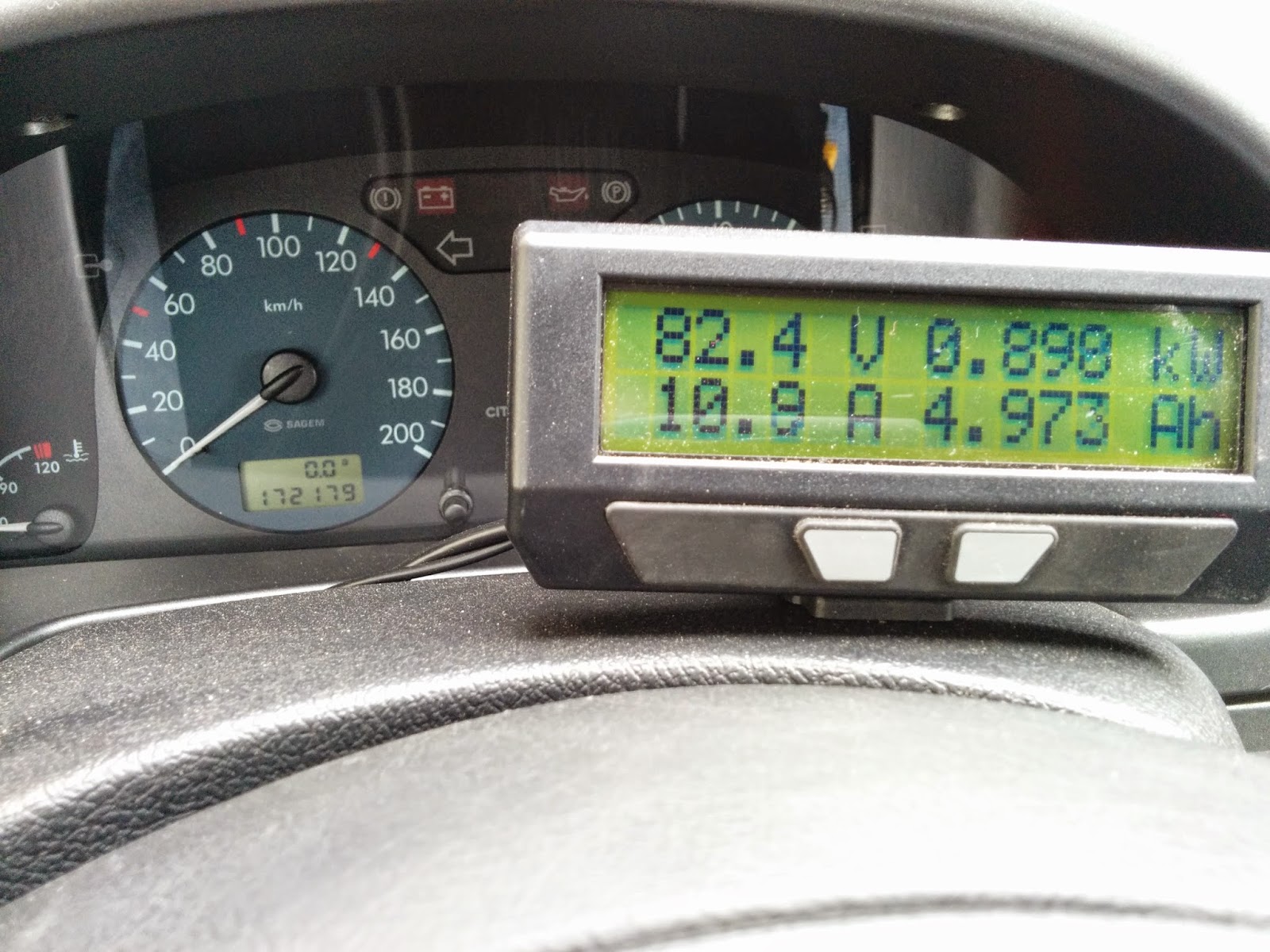 It was a little rainy, but no matter. 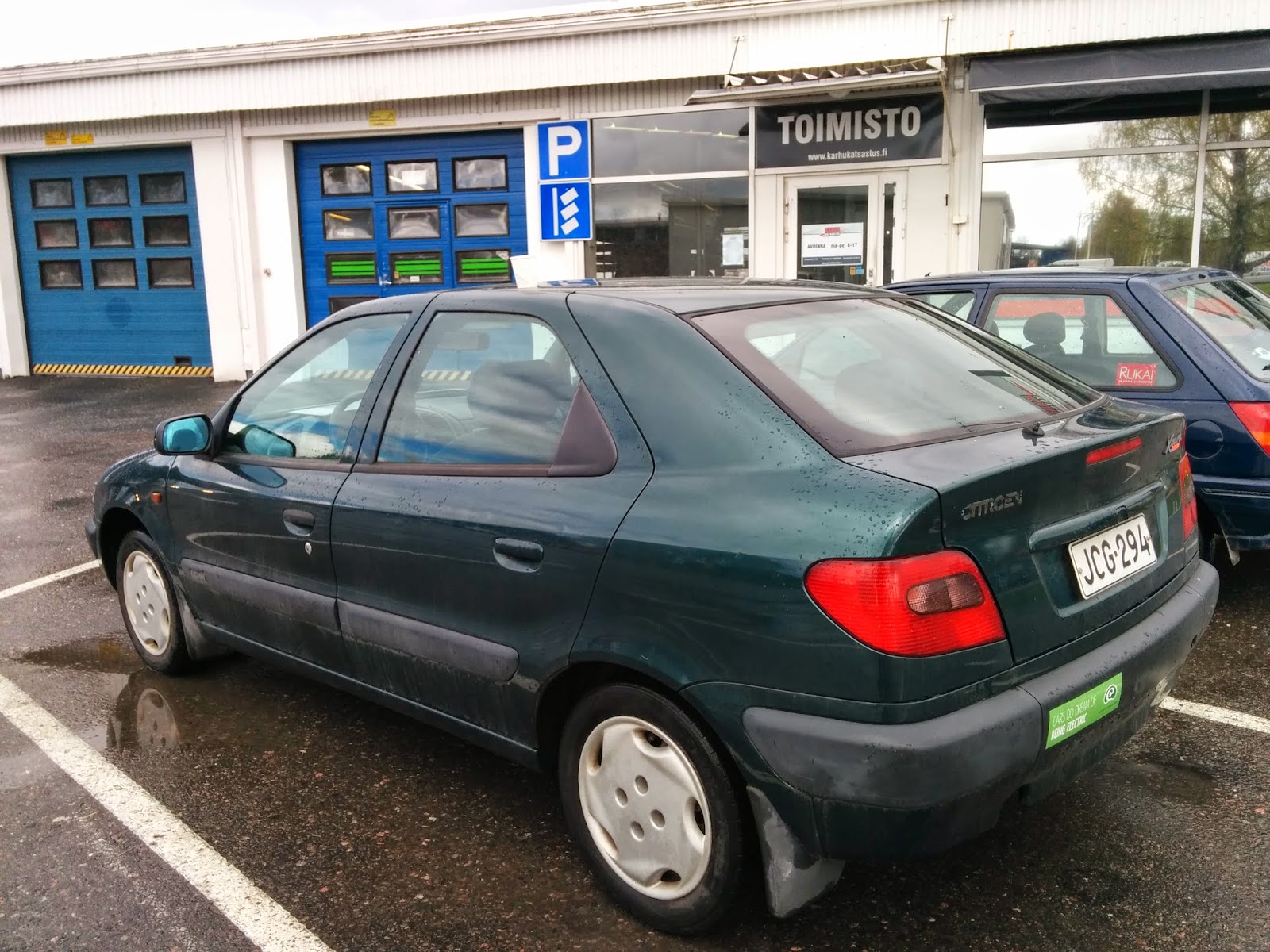 After everything got inspected and even the regular yearly inspection passed, to my no small surprise, we proceeded to weight the vehicle. 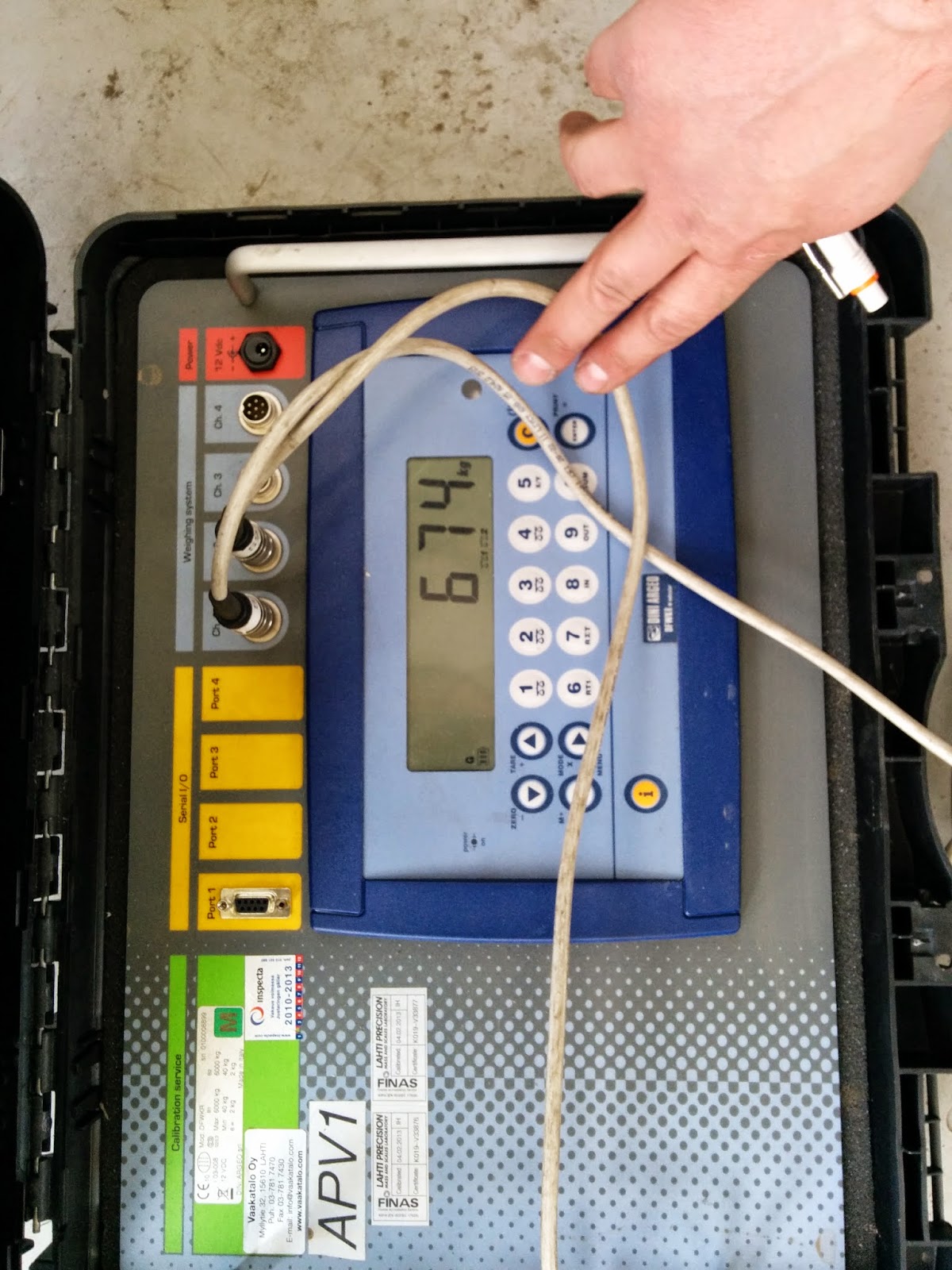 I was prepared to lose a seat due to gained weight, but it was not to be. 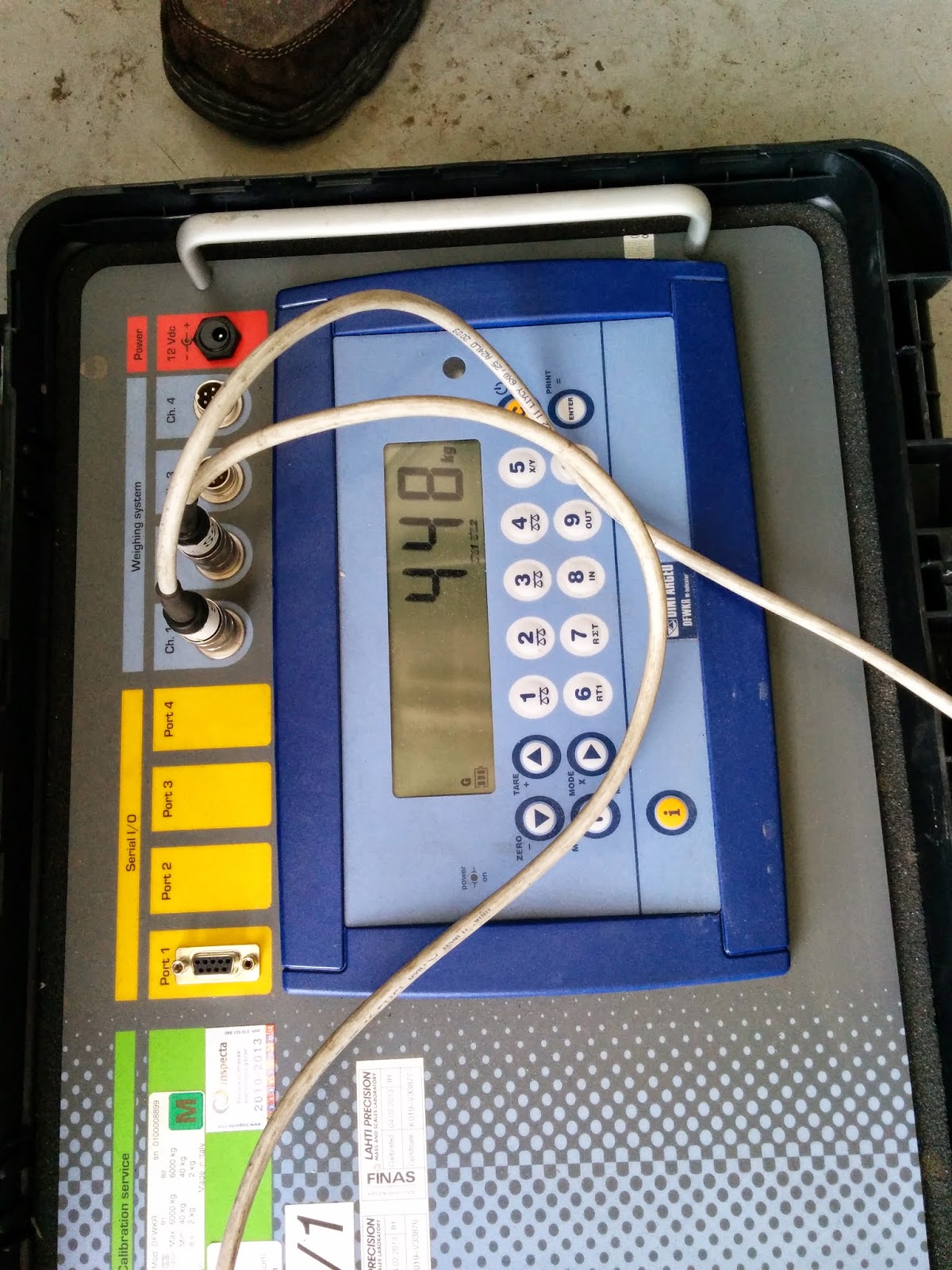 The front showed 674 kg and rear 448 kg. Those two plus a 75 kg driver equals 1197 kg! Only 7 kg more than original curb weight. I couldn't have done better even if had carefully measured everything. 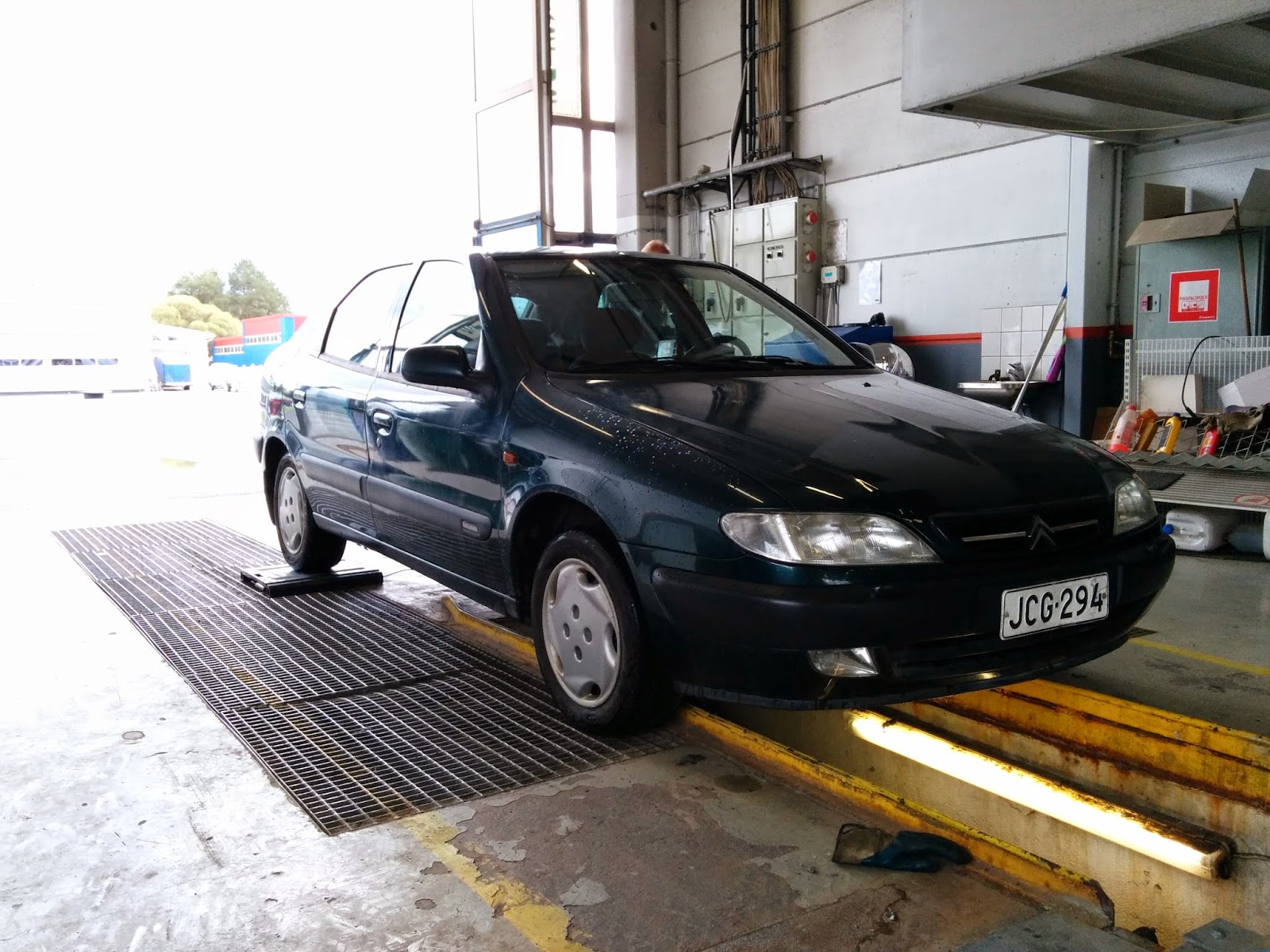 So no seats were lost and all was good. I even stayed below 1200 kg, which means I'll save on taxes, which are calculated based on weight on an old car such as this. 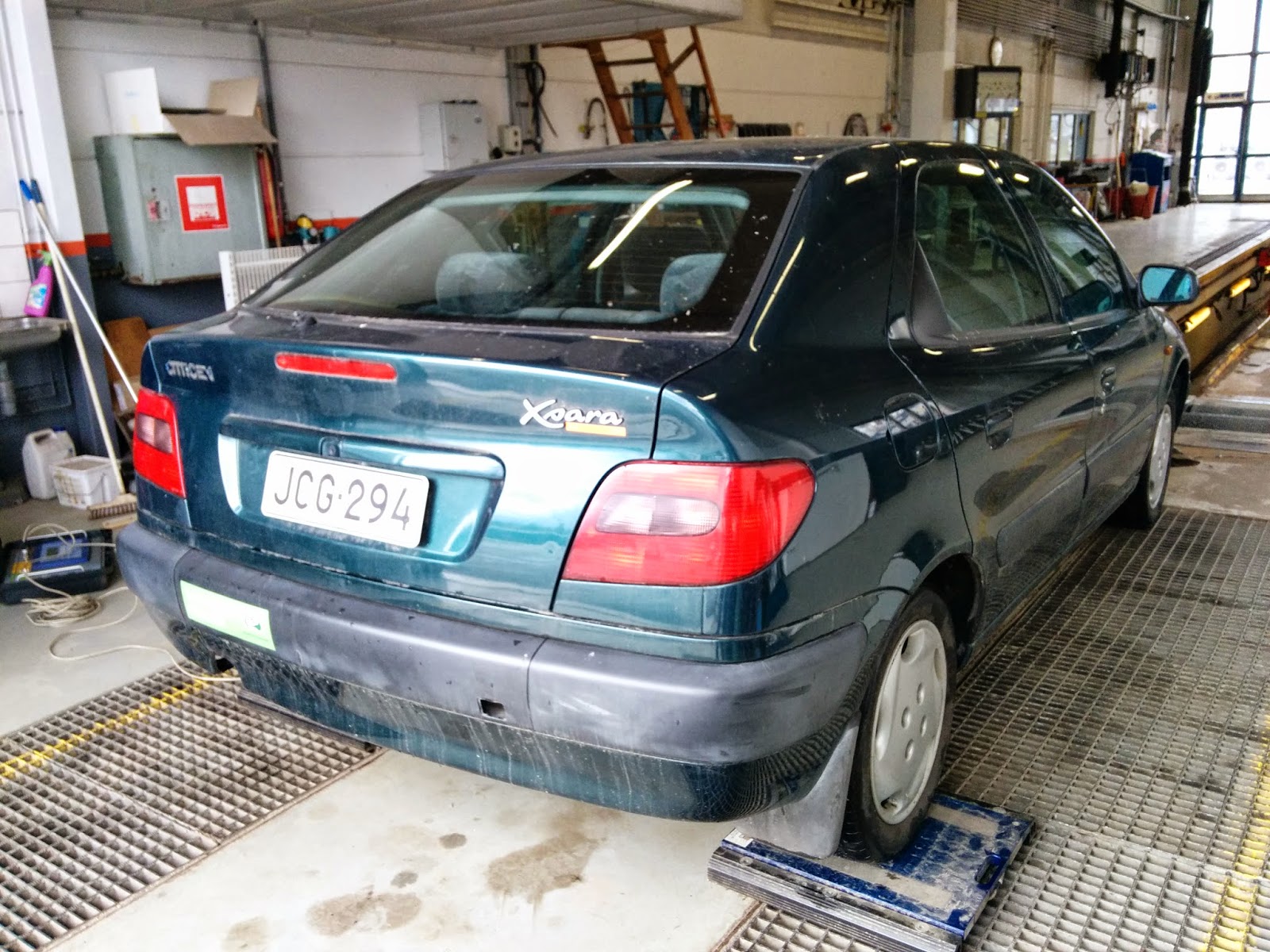 When all was said and done I was handed this beautiful piece of paper. Propulsion: Electric and Power: 12,8 kW. The power was printed on the identification plate of the motor and that sufficed. 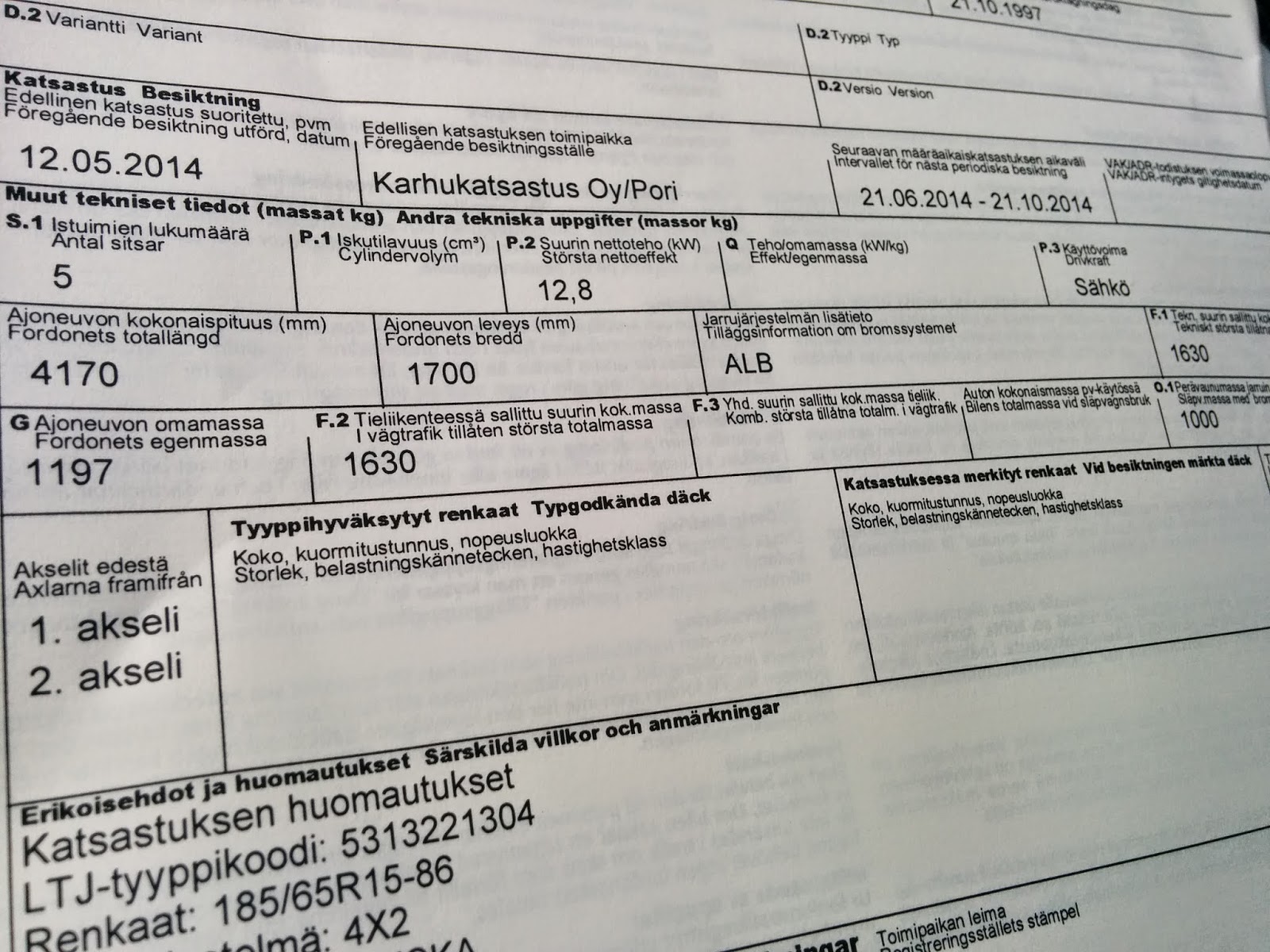 Good times. Now back to the bench. The motor support had bent again and needs even more reinforcing. What I don't have to fear anymore is the bureaucrats suddenly changing the rules.
Lähettänyt jsantala Ei kommentteja:

Another one bites the dust 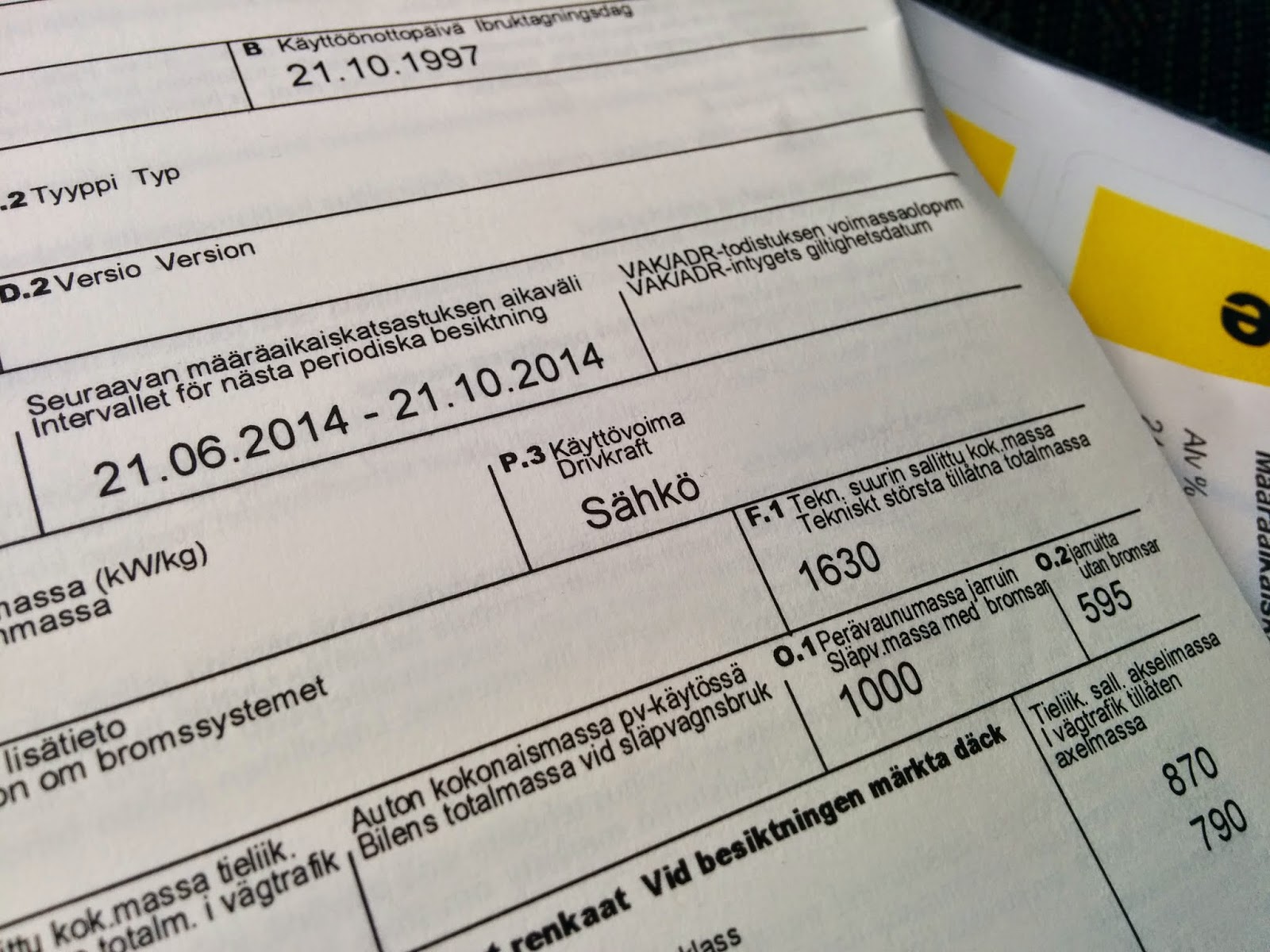 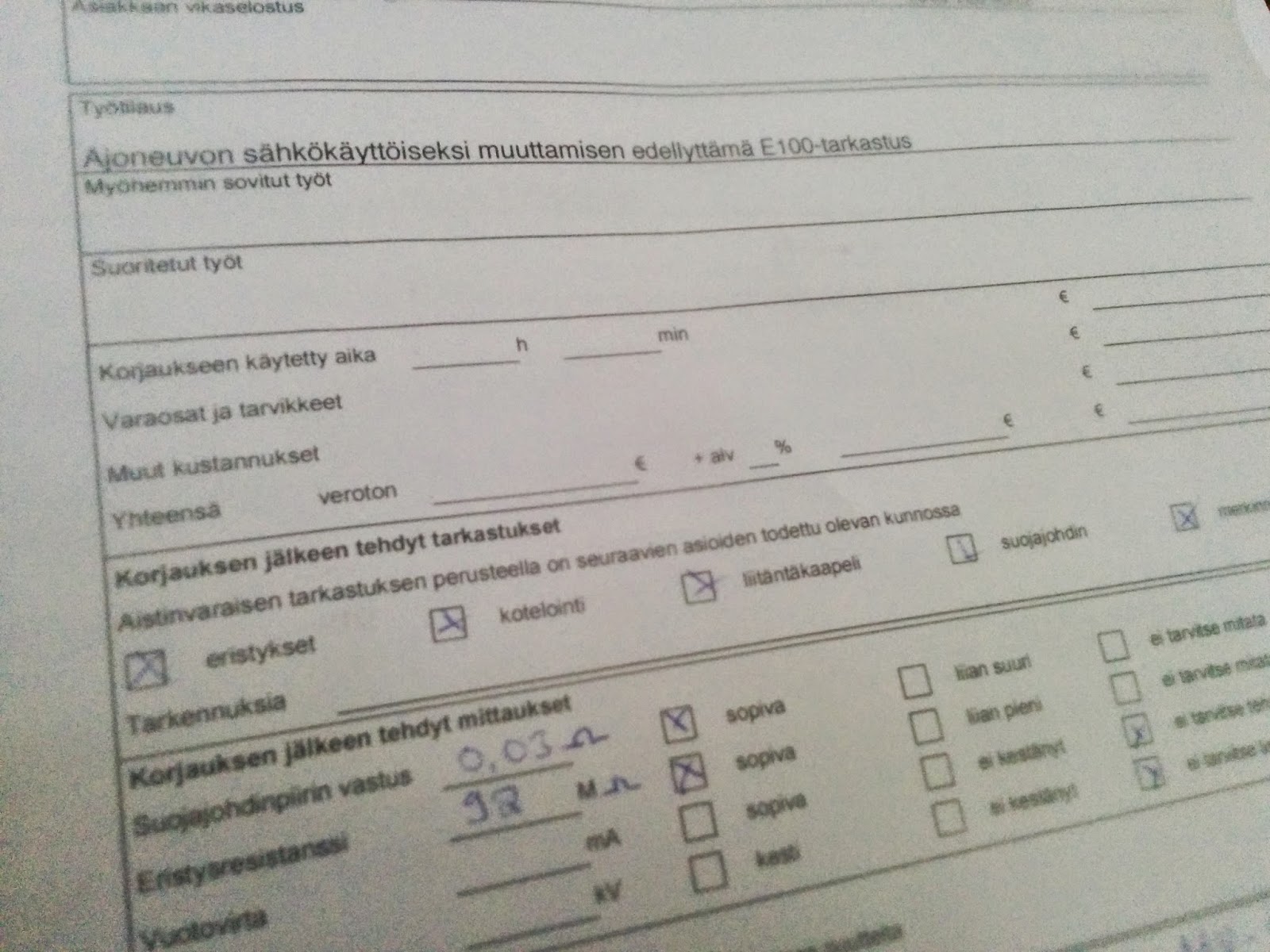 The Finnish Transport Safety Agency, or Trafi for short, requires that all M-class vehicles be inspected by a qualified electrician when converting to electric drive. Yesterday, I had a visit from two such individuals and we filled a form suggested by the chairman of Sähköajoneuvoyhdistys (Electric Vehicle Association of Finland). Most of the time was spent pondering on what we should exactly be measuring, but we figured it all out in the end. All tests passed with flying colours. Next up, the registration inspection. 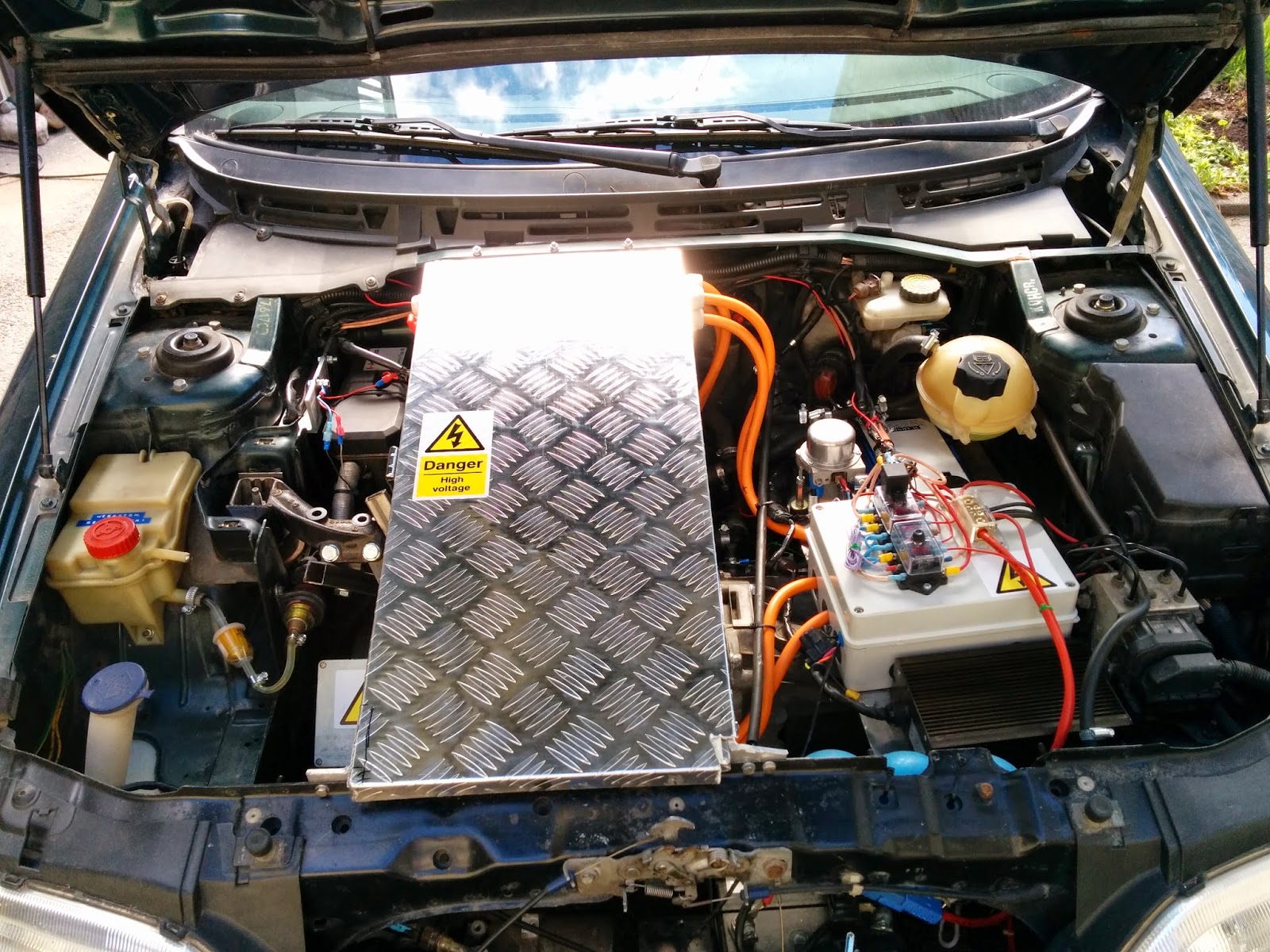 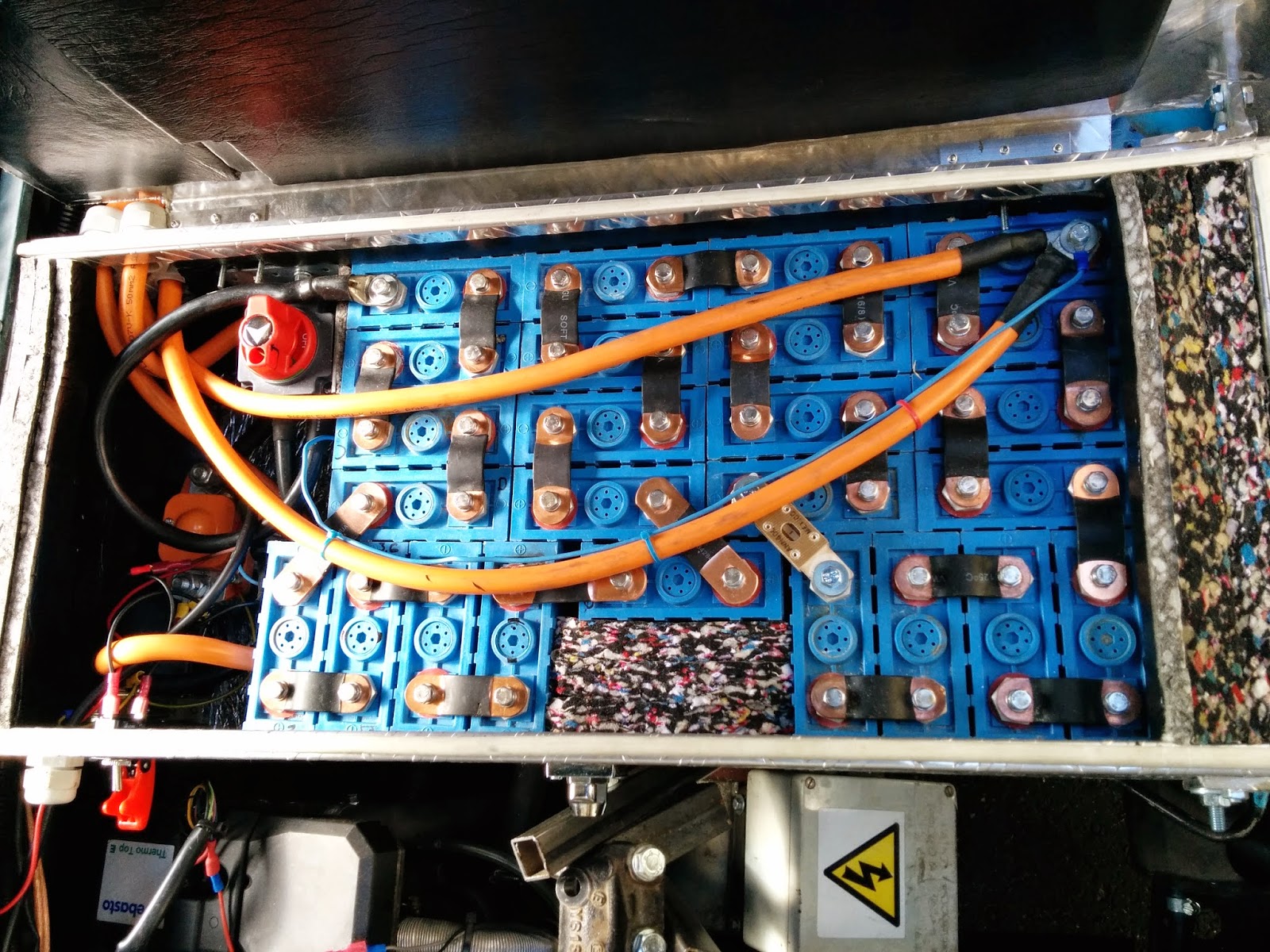 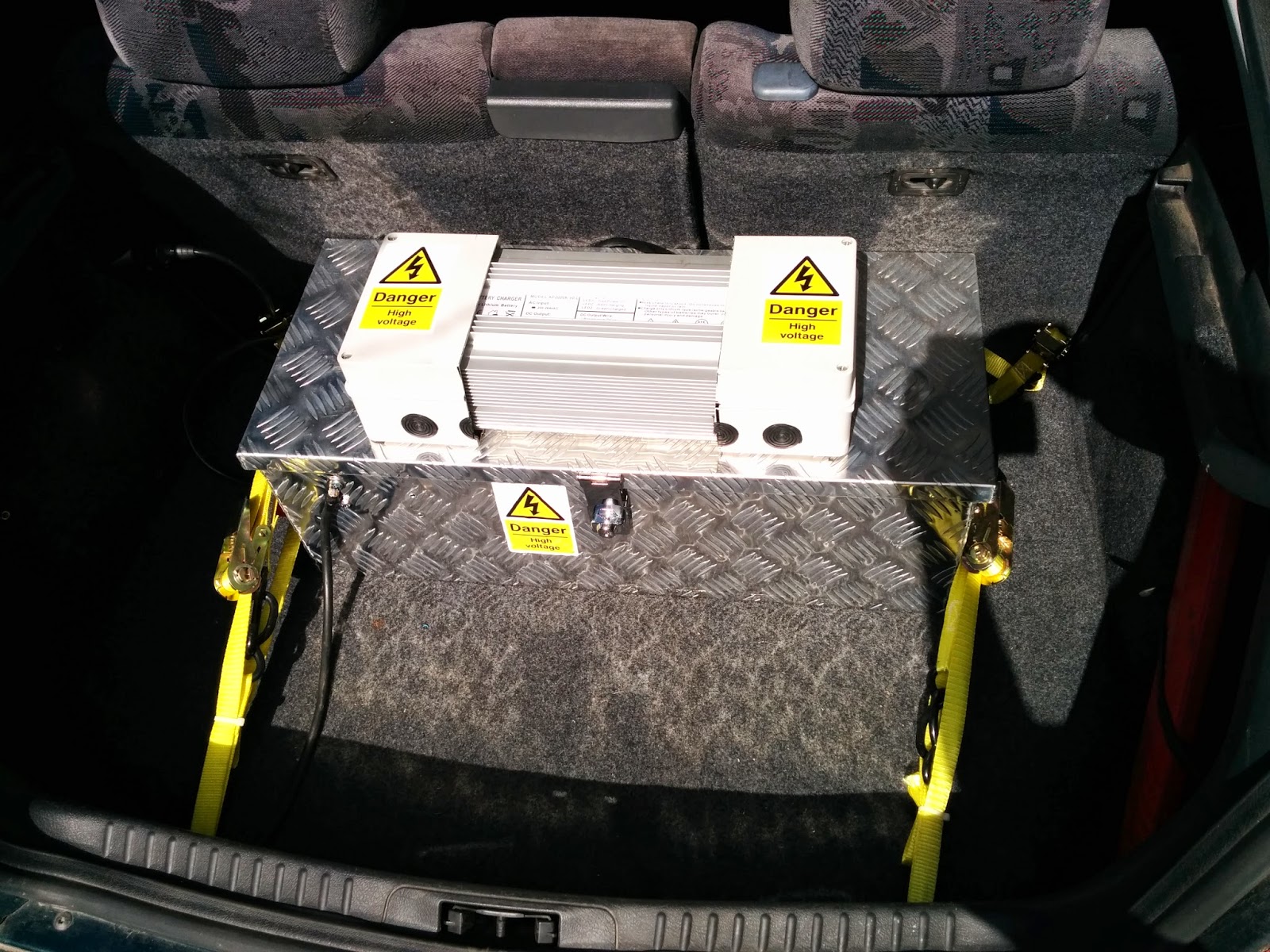 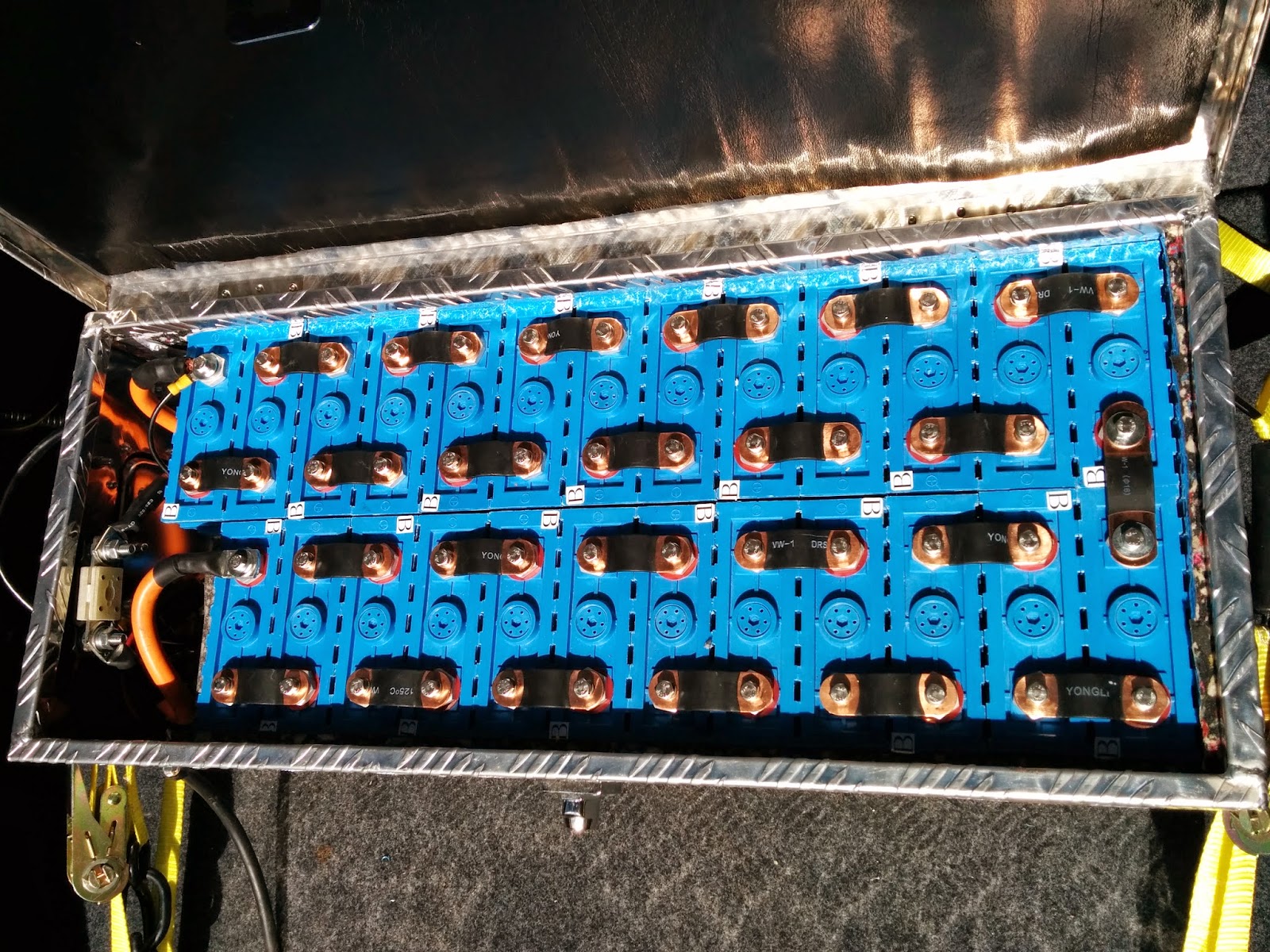 As a bit of bad news, two of my old 40 Ah cells shot up to well over 4 volts while charging both packs in parallel. I had bottom balanced everything pretty well this time, so either they've lost some capacity before or charging two packs of different Ah does not work as I thought.  I'm sort of leaning towards lost capacity, since I wasn't quite as thorough with my balancing when I did it a couple of years back and I pushed these cells down to 2 volts a couple times, so I may have hurt these two or they were bad to begin with. I had marked these two cells as A and B when I drained them earlier, because they were at a lower voltage than the rest of the cells, which would also suggest that they in fact are lower in capacity than the rest. I'll need to get a couple new cells or figure out another solution. As a stopgap I can always drop the front pack offline by using the service switch, which both front and rear packs now have.
Lähettänyt jsantala 1 kommentti:

The long tailpipe... or the lack thereof


You probably have heard the argument that an electric vehicle has what is called a long tailpipe. What that commonly refers to is that electricity is produced by burning fossil fuels and thus the actual carbon dioxide emission of an electric vehicle is not zero. It just gets put out someplace else.

What is also commonly left out is that producing oil and refining it also uses electricity. Apparently they'd rather not let you know how much, but Robert Llewellyn here in the video has worked it out. And it is surprisingly much.

So how much really? It turns out it's around 1.2 kWh per litre. That's like using a microwave oven for an hour or more. It got me thinking. How much is that per kilometer?

Let's take a motorcycle which consumes 6l/100km on average. I think that's a pretty fair guess at a petrol motorcyle fuel consumption. I think my Z500 has a tank of about 14 litres and it can just get me from Helsinki to Pori, which is about 240 km.