Not to be completely devoid of actual electric vehicle building I can report that I've been playing with the original electrical system of the Xsara, now known as kWsara. I haven't been able to get the original speedometer or tachometer working, but instead of I've figured out how to make all of the defunct instrumentation both inactive and silent. Silent especially concerning the immobilizer, which in addition to having a light lit also made a nasty sound for about half a minute when the key was turned. All this actually happened by just unplugging the fuse number 25. I also lost outside thermometer and clock, but those are hardly relevant.

What's interesting is that the owner's manual that came with the car seems to be completely wrong on a number of fuses. For example, I lost the cabin blower by unplugging number 21, even though it didn't have that listed. Also the very useful number 25 didn't list the immobilizer or instrumentation at all. Luckily the car came also with a Haynes manual, which I just happened to notice had the fuses listed as well. Turns out it's list was much more accurate or perhaps the owner's manual was missing some information intentionally so as to prevent fiddling about with stuff regular owner's are hardly encouraged to fiddle with.

Also an interesting discovery was made when I took out the glove box. I had been wondering why there were wires coming out of the fuse 5, which is for the ABS system, but hadn't given it much more thought. It all became clear when I noticed a hidden switch in the back of the glove box. Turns out some clever individual at some point in the car's life had decided he really didn't like ABS. I'm rather hard pressed as to why anyone wouldn't want such a useful system, but hey, people do a lot of things I don't understand at all.

Needless to say this possibility of unlegal ABS disablement came to an end and the mess of wires was one again replaced by the 10 A fuse that should be in slot 5. Additionally I've been able to solve the issue of front fog lights turning on automatically, which they obviously should not be doing. This was solved by disabling the automatic lights on feature which is common in cars around these parts, also by removing the fuse to that system. The real culprit is the left lever which controls the turn signals and lights in general. It seems to cause different problems in different french cars. In my 307 the worn left lever causes a similar, but slightly different problem of lights going from automatic on to full on at times, which causes the instrumentation light to flash on and off.

What I haven't solved yet is the issue of heat. In order to modify the heater core in this particular vehicle it would seem necessary to remove the whole dashboard. Not something I'd be terribly thrilled to do. The other option is to try to device liquid heating under the hood to produce the heated liquid which the petrol engine previously took care of. So it's down to dismantling the dash, liquid heating or some third option which I haven't thought of yet.
Lähettänyt jsantala Ei kommentteja:


I'd like to hear from any readers who are using or advocating "Top balancing". Specifically, I'd like to hear how you do it and what science do you think it's based on.

To me it more and more looks like "Top balancing" is something that you can't even do they way you think it can be done. Massaging as much energy in the cells by "boiling" them at a certain voltage doesn't even seem to result in evenly charged cells.

There's a couple of ways you could try to convince me otherwise. First you could "Top balance" your pack as well you can, discharge and recharge. If you have indeed managed to "Top balance" your cells they should all become full at exactly the same time, each and every time. In other words, if "Top balancing" works you'd need to do it only once, just like you only need to Bottom balancing once. From what I've gathered this is not so. And if it isn't, then it doesn't really work. You may think they're all full and balanced at the Top, but what you're really measuring is charge voltage. Nothing else.

Another test I'd like you to do is to "Top balance" your pack as well as you can and then disconnect the whole pack from everything, including BMS and any load. Completely isolated. Let it rest a day or two. Record voltages from each cell. Are they the same? If not, they cannot be at the same State of Charge. Open circuit voltage seems to be indicative or charge state, but only when left disconnected for a long time. This is because the Lithium ions need to settle before the reading is realiable and also the reason why "Top balancing" based on charge voltage doesn't seem to be based on anything.

If you are a proponent of Cell drift, which I haven't seen at all, I'd like to keep those cells disconnected and record the voltage of each cell once a day for as long as you can bother. If cell drift does exist and is measurable, you should see your cell voltages start to go down and differ from each other. Ideally this should be done on a new pack which hasn't been massaged to death by excessive periods of "Top balancing". This is because I'm pretty sure you can see the cells doing all kinds of weird things if you've been torturing them by cooking them at say four volts for days.

Disclaimer: All of my battery ramblings are based on my own experience and Jack Rickard's findings. They are applicable to CALB SE- and CA-series cells. Other cells and chemistries may at least require different voltages.
Lähettänyt jsantala Ei kommentteja:

All kinds of progress

I've been making all kinds of progress. The motor is mounted to the car and I also decided on a controller. In fact, I went ahead and ordered the whole lot, including the controller, a DC/DC converter and an assembly for the controller.

But first things first. I pieced together something to firmly attach the four points that needed attaching. The motor itself, the transmission, the drive shaft and one of the original motor mounts. The only way to get it done was to just try to position everything the way they seemed want to be and start welding together pieces of steel to keep them there permanently.

I think it came out quite fine. You can judge for yourself be looking at the pictures below. The little triangular piece attaches the drive shaft and the motor from below. 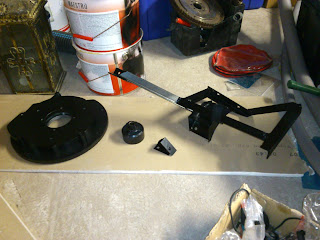 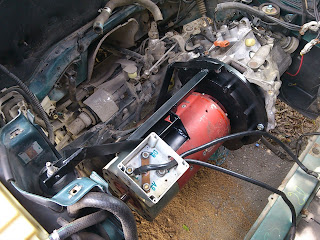 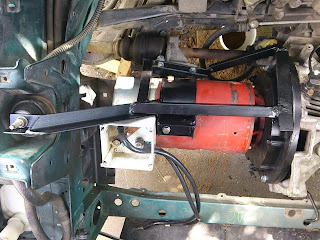 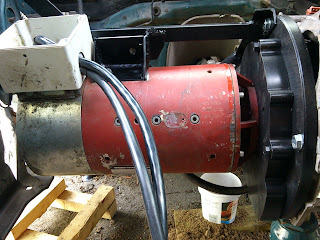 I was browsing the Kelly Controls website when I came across their KHD12600D controller, which they had on sale. I added the assembly for it and a DC/DC converter too. They had reasonable prices and also reasonable shipping fees, which is not usually the case. They came through amazingly as well. I put in the order on Sunday, got an email from Kelly on Monday and DHL delivered the package today, Wednesday. Ten out of ten for both Kelly and DHL. 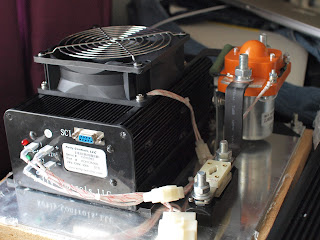 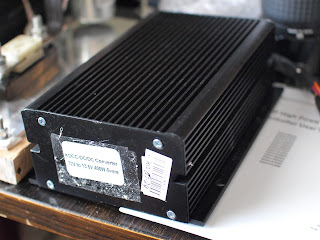 As you can see the controller came fully assembled with contactor, pre-charge resistor, diode and fuse. Very nice. The only ugly part was the crap on the other end of the DC/DC converter. Not very professional. Tried to clean it up a bit myself to make it a little more bearable. That was after I had taken the photo.

Next up mounting the assembly into the car and loaning the battery pack from the kWsaki electric motorcycle. Obviously a box to put the batteries in must also be deviced. After that it should be time for a little test drive. If that goes well I'll need to tackle the nasty but important power brakes and cabin heating.